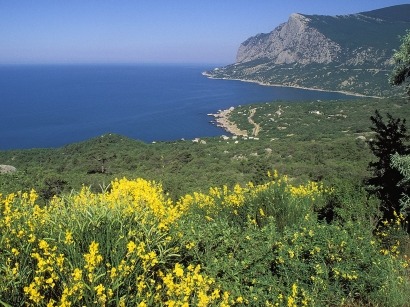 The construction of the solar power plant capable of producing 25 thousand megawatt-hours of environmentally clean electrical energy per year has been accomplished in accordance with the Natural Energy project. It will meet the needs of about 5,000 households in the area and will help reduce carbon dioxide emissions by 20 thousand tonnes per year.

Natural Energy is one of Ukraine's National Projects launched by the Ukrainian leadership in late 2010. It is aimed at producing electric energy from "clean" sources such as the sun and the wind in the amount of 2,000 MW. The objective of this initiative is to supply the area with low transportation cost electricity and preserve the environment, making it attractive for tourism development.

The State Agency of Ukraine for Energy Efficiency and Energy Conservation has also developed an energy efficiency programme, which it hopes will reduce energy demand and, combined with the roll-out of more renewable energy capacity, will take alternative energy’s share of the Ukrainian energy market to 30 percent before 2015.

The main driver of growth in Ukraine's solar photovoltaic market is a so-called green tariff system, introduced in September 2008 and amended in April 2009, which introduced fixed feed-in tariffs for electricity from renewable sources for 20 years.

Ukraine is the twelfth largest energy market in the world with an installed capacity of 54 GW as of 2009, exporting its excess electricity to such countries as Russia, Slovakia, Romania, Poland, Moldova and Hungary.

Earlier this month, the Chairman of the State Agency of Ukraine for Energy Efficiency and Energy Conservation, Nikolai Pashkevich, met with the Minister for Climate and Energy of Denmark, Lyukke Friis to discuss opportunities for cooperation between Ukraine and Denmark in the areas of energy efficiency and renewable energy.

The meeting took place last week during the forum entitled “Wind Power – the practice of different countries”, held as part of the official visit of His Royal Highness Crown Prince Frederick of Denmark and the Ukrainian-Danish Business Forum to Ukraine. Pashkevich will be hoping to tap into Denmark’s long history as a wind industry leader in order to help his country grow its own wind market.

State Agency of Ukraine for Energy Efficiency and Energy Conservation