Monday, 08 April 2019
0
Robin Whitlock
The Puerto Rico Community Foundation will promote a model for community-owned solar at the House Committee on Natural Resources hearing on the Status of the Rebuilding and Privatisation of the Puerto Rico Electric Power Authority (PREPA) tomorrow (9th April). 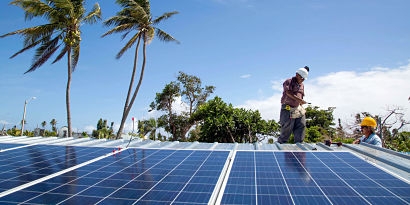 Dr. Nelson I. Colon will testify before Congress on the first community-owned solar microgrid ever built in Puerto Rico and how it can serve as a model for a resilient solar infrastructure connecting underserved and overlooked communities. He will be joined by witnesses from the government, civic and private sectors.

The hearing comes weeks after a House Committee on Natural Resources delegation visited the community of Toro Negro, Ciales, which spent eight months with no electricity in the aftermath of Hurricane Maria.

The Solar Community of Toro Negro, which formed in direct response to the lack of electricity in the Island, now serves as a self-sufficiency model needed to rebuild the Island infrastructure using renewable energy. It grew out of a mountain community’s determination and the muscle of the philanthropic sector. As a result, 28 residences are energy independent today.

Residents received solar panels and related donations from Puerto Rico Community Foundation, a philanthropic organisation founded 33 years ago dedicated to social and economic community development, as well as Somos Solar and partners such as Para La Naturaleza and Duke University.

The visit, led by Congressman Raul Grijalva, was part of Congressional efforts to assess Puerto Rico’s current situation 18 months after Hurricane Maria devastated the Island and as President Donald Trump threatens to cut off further aid.