Wednesday, 29 November 2017
0
Dan McCue
According to a new report by the Solar Foundation, Generation 180 and the Solar Energy Industry Association, American schools are switching to solar energy at a rapid pace, reducing their electricity bills and freeing up resources to invest in education. There are now 5,489 K-12 schools in the United States that use solar energy, nearly double the total solar capacity that was installed at schools in 2014. 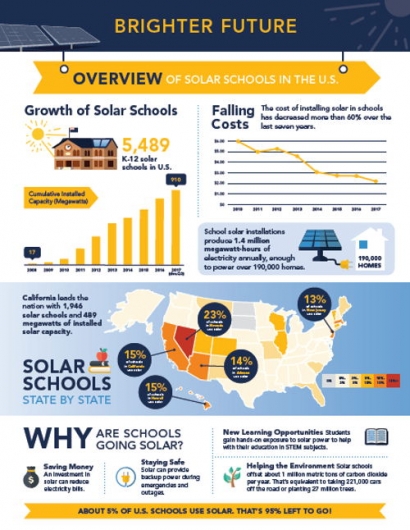 The report, Brighter Future: A Study on Solar in U.S. Schools, 2nd Edition, is a comprehensive study of solar at K-12 schools nationwide. As a follow-up to the first study released in 2014, this report captures the accelerating trends of solar adoption in U.S. schools.

However, there is concern among some in the solar industry that possible tariffs on imported solar equipment from the Section 201 Trade Case could have a negative impact on the adoption of solar in schools.

GreenTechMedia quotes Dan Whitten, a spokesman with SEIA, saying, “All of the reasons why people are going solar, […] really tie back to the affordability. Injecting significant additional costs on these projects would poke holes in the very reason that people are adopting solar: That it is affordable and that it is competitive with other fuels. Artificially raising prices is never a good thing.”

Currently, schools with solar power have a combined capacity of 910 MW, an increase of 86 percent over 2014. The amount of electricity these schools produce annually, at 1.4 million MWh, is enough to power approximately 190,000 homes. Close to 4 million students in total attend these schools.

With 1,946 solar schools and a 489 MW capacity, California leads the nation in the number of schools.  New Jersey, Arizona, Massachusetts, and New Yorkfollow. Nevada has the highest adoption rate, with 23 percent of schools using solar energy statewide and Arizona has the most solar school capacity on a per capita basis, at 86 watts per student.

While costs have been declining, schools also have more financing options that minimize up-front investment. Within the last three years, nearly 90 percent of the schools for which data is available used a power purchase agreement to install solar, in which a third-party finances, builds, owns, and maintains the system.

In conjunction with this report, clean energy nonprofit Generation 180 is launching a national Solar Schools Campaign to garner support for the transition to solar energy. The campaign is creating volunteer teams and will leverage a detailed “how-to-guide” in the report that provides advice on how schools can muster support, assess economic feasibility, identify financing options, generate proposals, and select installers for solar energy systems.

The Brighter Future report includes several in-depth case studies that show how schools across the United States have gone through the process of installing solar. The report identifies numerous cases where schools are hoping  to save millions of dollars in electricity bills over the next two to three decades. Some of the solar projects were initiated by students themselves, while others got started at the administrative level or were part of a school’s capital improvement campaign.

An interactive map of solar schools