Thursday, 16 December 2021
0
Robin Whitlock
Scatec has met with HE President Abdel Fattah El-Sisi to discuss major plans for green energy development and signed an MOU to develop a green ammonia facility in the SCZone. 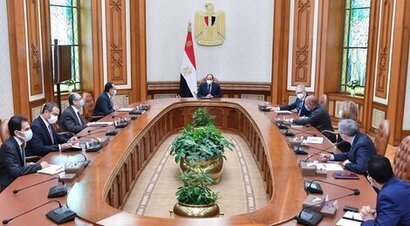 Building on Scatec’s strong renewables position in Egypt and the recently announced plan for a 100 MW green hydrogen plant in Egypt, Scatec CEO, Raymond Carlsen, has met HE President Abdel Fattah El-Sisi, President of the Arab Republic of Egypt, to discuss plans for large scale seawater desalination, hydrogen and ammonia production based on renewable power in the country.

The meeting was attended by the Prime Minister, Dr. Mostafa Madbouly, Minister of Electricity and Renewable Energy, Dr. Mohamed Shaker, CEO of The Sovereign Fund of Egypt, Mr Ayman Soliman and the Norwegian Ambassador, Hilde Klemetsdal.

Egypt has great ambitions to develop a range of green energy projects and Scatec intends to take an important role in these projects as the largest renewable energy producer in the country.

“It was a great honour to meet with HE President El-Sisi, where he shared the government’s ambition to develop Egypt into a renewable hub for the region” said Scatec CEO Raymond Carlsen. “Power from solar and wind, green hydrogen, green ammonia and water desalination are all key components of this plan and Scatec is well positioned to take part in it. We are impressed by the strong commitment shown by the country’s leadership, which bodes well for the future of renewable energy and its applications in Egypt.”

The company has also signed a Memorandum of Understanding (MoU) with the Suez Canal Economic Zone (SCZone) to study the development of a new green ammonia manufacturing facility, fuelled by green hydrogen produced from renewable power, mainly for export.