Tuesday, 24 July 2018
0
Dan McCue
A photovoltaic system has been erected at the Bislett Stadium in the Norwegian capital by the City of Oslo's Culture and Sport Office (Kultur og Idrettsbygg Oslo KF). Installation was carried out by Abmas Elektro. Since the end of June this year, a system with Panasonic's HIT® modules with 212.55 kW of power has been generating solar power for the most famous stadium in Norway on the grandstand roofs. 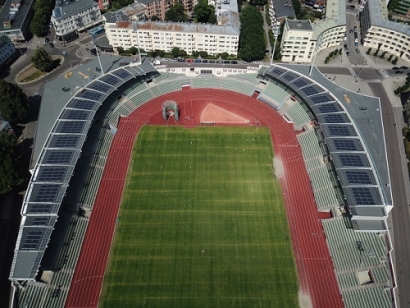 “The government has committed itself to cut CO2 emissions by 40 percent before 2030”, says Jan Erik Johansen, general manager at Abmas Elektro. “This pv installation is one of the first steps and an important signal towards this goal. The stadium is a national landmark and when this type of installation is possible here, it is possible to be done everywhere on state-owned buildings.”

The original Bislett stadium was built between 1917 and 1922. Several championships took place here, for example the European Athletics Championship in 1946 and the Olympic Winter Games in 1952. In 2004, the old stadium was replaced by a new one. It has a soccer stadium and an athletics site. 3,500 of 15,400 seats are roofed.

The photovoltaic plant with 654 Panasonic modules HIT® N325 consists of two parts which are installed on the eastern and western side of the stadium. The modules are installed on the bleacher roofs. Due to the installation on the flat roofs it was possible to position them in an optimal direction.

On the bleachers the space is scarce. “Therefore our customer wanted modules with high efficiency which produce lots of solar energy at a reasonable price,” said Johansen.

“The photovoltaic market in Norway is in the startups but we expect a high growth,” said Johansen. In 2017, 17 MW pv power were installed in the country. Experts forecast an increase of 35 percent each year in the next three to five years.

Photo: 212 kW photovoltaic system on Bislett Stadium has been in operation since the end of June.