Friday, 16 July 2021
0
Robin Whitlock
Pupils in Warwickshire have been given a behind-the-scenes insight into different careers within the renewables industry, after paying a visit to the largest community solar farm in the UK. 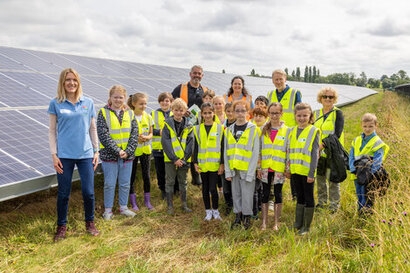 Around 100 children, aged 9-11, were invited to attend workshops at Leys Solar Farm in Stratford-upon-Avon. Taking place across three days in July, the initiative was designed to educate the next generation on climate change, while inspiring young people to think about green careers.

During their visit, the pupils took part in a range of practical activities. They were given a tour of the solar farm and got to meet the team who constructed it. They also took part in wind and solar power challenges, which saw them making a wind turbine out of old materials and using small solar cells to build a power circuit. Plus played some energy saving games designed to encourage positive behavioural change.

Leys Solar Farm forms part of the largest community owned solar farm in the UK, which covers an area of 75 acres – the equivalent of more than 1,800 football pitches. The total development comprises of around 60,000 solar panels and is capable of generating enough energy to power around 3,800 homes. It was designed and constructed by Reading-based renewable energy developer, Anesco, who also sponsored the school visits.

“It was fantastic to meet all the children and to talk to them about solar power and the role renewable energy has to play in tackling climate change” said at Tom Wales, Regional Operations Manager at Anesco. “They were so enthusiastic, with loads of great questions! If the UK is to achieve its net zero carbon emissions target and make the switch to cleaner, greener energy then we’re going to need a skilled workforce to deliver it and hopefully these workshops gave the children an insight into the many different types of careers on offer.”

“A huge thank you to all the schools who joined us” added Kate Evans, Graduate Planet, who co-ordinated the initiative. “For the children, this was a fantastic opportunity to get a behind-the-scenes look at a solar farm and to learn about climate change through fun, practical activities. We’re sure they’ll remember the experience for a long time to come. Following the various lockdowns and a time where the children’s worlds have been so much smaller, the chance to go on a trip somewhere so unique, has not only been fantastic for their learning but also their wellbeing. We cannot thank our generous sponsors and supporters enough, as well as those who gave up their time to join us for the workshops and helped make the visits such a success.”

The three-day event was funded and backed by a number of organisations including Anesco, the solar farm owners Heart of England Community Energy (HECE), Orbit Group, Graduate Planet CIC, The Royal Society of Chemistry and Andros UK.