Tuesday, 08 February 2011
1
A study published this month by the European Photovoltaic Industry Association (EPIA) and Greenpeace International shows that global investments in solar photovoltaic (PV) technology could double from €35-40 billion today to over €70 billion in 2015. The estimated investments in the European Union alone would rise from today’s €25-30 billion to over €35 billion in 2015. 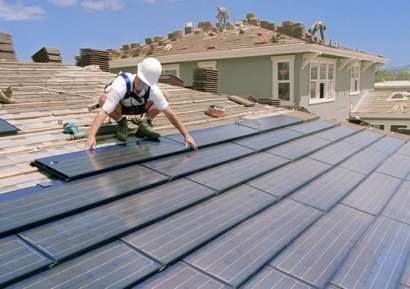 The “Solar Generation 6” report on the global market outlook for solar photovoltaics foresees that PV could account for 12% of European power demand by 2020, and up to 9% of the global power demand by 2030. “Our goal is to make solar photovoltaic technology a mainstream power source through policy support at an optimal cost for consumers,” said Sven Teske, Senior Energy Expert at Greenpeace International. “Solar photovoltaic is a key technology for combating climate change; our research shows that it creates 35 to 50 jobs per tonne of carbon dioxide savings and will increase the security of energy supplies by reducing dependency on energy imports to Europe.”

Since 2005, PV prices have dropped some 40% and by 2015 the cost of PV systems is expected to drop by an additional 40% compared to current levels. As a result, PV systems will be able to compete with electricity prices for households in many countries of the European Union within the next five years.

“Solar photovoltaic technology has, for many years now, shown increased power efficiencies and cost reductions,” said Ingmar Wilhelm, President of EPIA. “Today’s cost predictions, driven by economies of scale in light of global photovoltaic capacity, totalling 40,000 MW in 2010, show that the technology is on the brink of an economic breakthrough.”

“We aim to make this important phase of cost competitiveness visible, and the EPIA will provide a realistic road-map for every country with clear concepts on market mechanisms allowing equal treatment of all electricity sources,” added EPIA’s president.

The report estimates that current global solar PV capacity could grow from over 36 GW at the end of 2010 to close to 180 GW by 2015. European PV capacity is expected to increase from over 28 GW in 2010 to nearly 100 GW by 2015, and has potential to reach up to 350 GW on a global basis by 2020. This would save as much as 1.4 billion tonnes in carbon dioxide emissions globally and 220 million tonnes carbon dioxide within the EU every year.

In addition to its environmental benefits, the report shows solar energy to be a sustainable way to address concerns about energy security and volatile fossil fuel prices, as well as a substantial factor in economic development. The European PV industry, which already employs over 300,000 people, could provide jobs to over 600.000 by 2015, and has potential to further increase to 1.6 million in 2020 if general policy support remains effective.

The “Solar Generation 6” report also highlights the enormous PV potential for Europe in the light of the Union’s established 20% renewable energy and the 20% energy efficiency target. Based on this potential for photovoltaic growth, the EU could easily increase its emission reduction target from the current 20% by 2020 to a more aggressive 30% level.

The “Solar Generation 6” is a joint initiative by EPIA and Greenpeace and the title reflects the study’s aim to define the role that solar electricity will play in the lives of a population that is born today and will develop into an important energy consumption group.

Tags: Solar ,Photovoltaic ,PV ,Europe ,Electricity ,Jobs ,Climate change ,Efficiency ,Energy Efficiency ,Fuel ,Renewable energy ,Saving ,Carbón
Add a comment
Betsy D. Ramson
As a solar energy fan I am glad tha europe is doing this effort to increase solar energy and if you want to create your own solar energy in your home by creating your own solar panels go to http://solarinhome.us put your name and e-mail and you will get a lot of information
¡Suscríbete!
wind