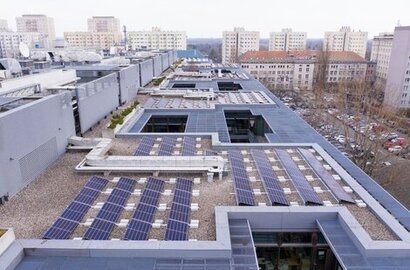 Installed in 2020 on its Warsaw headquarters, the PV system is predicted to pay for itself in just six years - two years faster than originally planned. The system has been so successful in reducing its energy costs, that Agora installed two additional solutions on its print facility in March 2022.

As energy prices in Poland have soared in recent years , costs have dramatically increased for companies powering mid-to-large commercial buildings like Agora. The company wanted to tackle this problem while also reducing its carbon footprint, so solar was deemed the natural choice. Delivered by its installation of a solar system managed by SolarEdge inverters, the Agora PV solution was chosen for its performance benefits and market leading safety features – including SolarEdge's SafeDC and rapid shutdown features. It was also chosen for its ability to optimise power from a roof space that was limited and partially shaded.

“In 2001 we received an architectural award for our headquarters in Warsaw” said Marcin Tkaczyk, Administration Director of Agora. “To further improve its sustainability credentials, we wanted to install a solar system. But, with so many people in the building, we needed to not only make a good choice in terms of return on investment, but we also needed an advanced safety solution. Having done some background research, we agreed with our installer, Bison Energy, on which system would best suit our needs. We’ve been so pleased with the SolarEdge system and how much it’s saving us in energy costs that we’ve had two additional installations completed.”

As employee safety was also at the top of the agenda for Agora, SolarEdge's SafeDC function which reduces the output voltage to a touch-safe 1V during maintenance, was of specific interest. The systems rapid shutdown feature, which in the event of a fire turns the system off within 30 seconds, was also critical to Agora. What’s more, the company’s advanced arc fault detection system, was key to its choice of SolarEdge. Taking just seven days to install, Agora now produces an average of 87 MW/hr, while reducing its carbon footprint by approximately 86,000kg of CO2 a year.

Agora’s PV system installed on the roof of the Company’s headquarters consists of one SolarEdge 50k inverter, two SolarEdge 17k inverters, 272 modules and 136 SolarEdge P730 power optimisers to manage and optimise power generation. Unlike the traditional string inverter, where modules adapt their level of efficiency to the weakest module in the string, SolarEdge’s inverter allows each module to run at its maximum output. In the case of Agora, where roof space was limited and partially shaded due to other rooftop infrastructure, SolarEdge’s inverter is a necessity to maximise power production.

“We rate SolarEdge systems so highly, that we were importing them from Germany before they were available in Poland” said Michał Szewczyk, President of Bison Energy. “For Agora it was an easy recommendation to make. To meet their power and safety requirements, as well as ensuring swift ROI, SolarEdge was the obvious choice.”