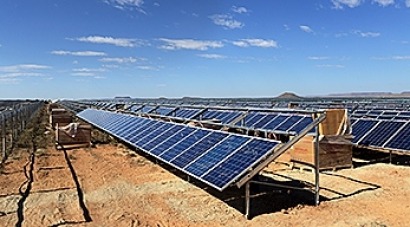 The 75MW Kalkbult solar PV plant near Petrusville in the Northern Cape, was officially opened on Tuesday 12thNovember, three months ahead of schedule.

"The plant covers 105 hectares of a working sheep farm and consists of 312,000 solar panels linked to inverters, transformers and a high-voltage sub-station. More than 600 people were employed during construction.

"Now that it is operational, it is expected to generate 135 million kilowatt hours per year, equivalent to the annual electricity consumption of 33,000 households."

“This solar plant is only the beginning” said Davidesen. “Hopefully we will see solar power being introduced on a major scale throughout Africa in the coming years.”

Equity for the project was provided by Scatec Solar, which is the largest shareholder, alongside Norfund, Simacel, Stanlib/Standard Bank and Old Mutual Life Assurance Company. Standard Bank has provided capital investment.

A proportion of the revenue from the facility, along with some of the dividends, will be earmarked for local social and economic development initiatives within a 50 kilometre radius.

The plant is among 47 solar, wind and mini-hydro projects awarded 20-year electricity generation contracts under the South African government’s Renewable Energy Independent Power Producer Procurement Programme (REIPPPP), introduced three years ago by the Department of Energy. The aim of the programme is to help the country combat climate change by reducing its current near-total dependence on coal-based electricity and accompanying high level of greenhouse gas emissions. The Kalbult plant is intended to displace annual greenhouse gas emissions of 115,000 tons.

The project is expected to add momentum to the country’s Green Economy Accord period.

Signed three years ago, the accord is intended to create 300,000 new jobs in renewable energy generation, energy efficiency, biofuel production and manufacturing. Its secondary mission is to support green projects and natural resource conservation and rehabilitation.