Thursday, 18 May 2017
0
Robin Whitlock
The Solar Trade Association (STA) has published its ‘Great British Solar Manifesto’, summarising the tremendous contribution solar can make to the prosperity of Britain over the next Parliament. 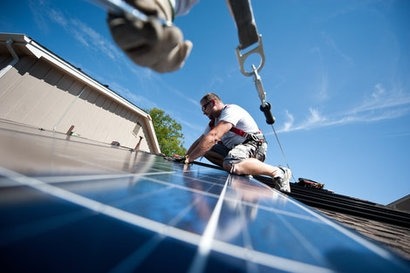 The STA document concludes that, providing the next government develops a fair policy framework that works with market forces, solar power can provide an enormous contribution to the prosperity and well-being of Britain in the near future.

In less than a decade solar has transformed the future of energy. 882,228 homes now have solar power. Wholesale electricity prices have been lowered for communities and unprecedented cost reductions of over 70 percent have been achieved. Growth of solar power has catalysed the development of smart local networks and technologies, including storage and EVs.

The STA is aiming for 40 GW of solar by 2030, consistent with the Committee on Climate Change’s ‘high’ renewables scenario. Securing this trajectory would require the installation of around 10 GW of new solar capacity over the next Parliament, a near doubling of current capacity that would see solar provide around 10 percent of UK power by 2022.

“Whichever party wins this election, they should remember that solar has already won the public vote on energy by a landslide” said STA CEO Paul Barwell. “Every day people recognise the overwhelming benefits solar offers, from cheap power to very real control over energy bills. If politicians really want to transform choice & competition in the energy market for good, their efforts are best spent making solar power & storage accessible to the millions of people and businesses who want it. Unlocking the benefits of solar will be easy for the next Government because we are not looking for new subsidies. But the industry now urgently needs energy policy to work on a level playing field, with the grain of market forces, while properly costing carbon. We also need fair tax treatment and effective regulation, including for new build, smart networks and business carbon performance.”

The extent to which 10GW could be delivered over the next Parliament depends on the extent to which the new Government levels the playing field for solar power and pursues progressive regulation & fair taxes. It will also depend on the speed of network modernisation.

Deployment of solar has dropped by 80 percent compared to average deployment over the past seven years, thanks to Government cuts, despite being responsible for only 6 percent of the Government’s overspend on renewables. Over the past year the industry has been left fighting against shock business rate rises of up to 800 percent for rooftop solar – taxes that do not apply to solar competitors on the continent and to onsite fossil generation in the UK.

“The speed and direction of technology change is clear” added Mr Barwell. “The global solar market is estimated in trillions. Solar sits at the heart of a smart energy system that can save the UK billions. If we are to seize these tremendous opportunities in energy, the next Government will enable the solar Britain that pretty much everybody wants, and become a global leader in decentralised smart flexible power.”

Achieving 10 GW of solar power would deliver very similar proven benefits to the peak delivered by solar over the last Government, which saw a high of 34,000 jobs and delivered an estimated £8 billion of investment. It would also result in 5 million tonnes of further cuts in CO2 emissions. Furthermore, analysis by Aurora shows that the cost of integrating a further 10 GW of solar into the grid would be modest. With a stable domestic solar market British firms could better pursue vast and growing international opportunities – estimated at $3.7 trillion to 2040 – where solar leads global clean energy investment.