Wednesday, 20 January 2021
0
Robin Whitlock
STI Norland, one of the largest manufacturers of solar trackers and fixed structures in the world, based in Navarra, Spain, has been included in the CEPYME500 list published annually by the Spanish Confederation of Small and Medium Enterprises (CEPYME). 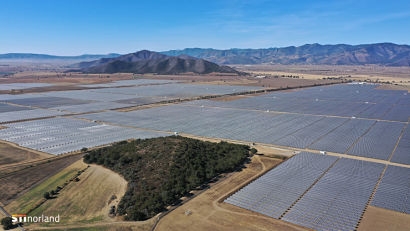 CEPYME highlights the country’s fastest growing companies. After a rigorous evaluation of STI Norland’s turnover, sustained growth, size and profitability, CEPYME has decided to recognise the company’s work in research and development.

In evaluating STI Norland, CEPYME took into account the company’s economic performance over recent years, its ability to generate activity and employment and its potential for innovation and international projection. The last of these analyses was carried out by CEPYME in 2018, when the Spanish branch of STI Norland achieved growth of 138 percent and a sales volume of more than 64 million euros.

“Our growth goes on and we will close the current year with sales of around 100 million euros in Spain and 200 million euros in the whole group” said President of STI Norland, Xabier Blanco. “We thank CEPYME for the initiative and wish that our experience serves as an inspiration to other companies”.

CEPYME’s list was presented on December 17th at the Madrid Stock Exchange, attended by the Spanish Vice President and Minister of Economy, Nadia Calviño, and the President of the Spanish Confederation of Business Organizations (CEOE), Antonio Garamendi.

The CEPYME500 initiative began in 2017, recognising the work of small and medium enterprises. Its objective is to project the companies selected, both nationally and internationally, helping them to boost their growth potential and visibility.

STI Norland is an international manufacturer of solar trackers and fixed structures for large scale PV projects. Headquartered in Spain and founded in 1996, the company has subsidiaries in Australia, Brazil, Chile, India, Israel, Mexico, South Africa, and the United States.