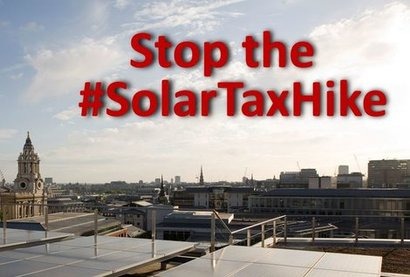 Business rates are the council tax equivalent for businesses. They are paid on the value of the property and all the upgrades, including machinery, annually. From this April, changes to the rateable value, the perceived value that businesses pay tax on, will mean the annual tax bill on solar panels will increase 6 to 8 fold for businesses and 3.5 to 4.5 for healthcare, education and defence sites.

The new business rates will mean that organisations who own their solar panels and use the clean power it produces will see the tax bill on their panels go up considerably. This in turn doesn’t just affect individual business owners of solar panel installations, it will also affect organisations such as schools and hospitals. Domestic installations are not affected.

The STA says that climate change means everyone has to work together and that the Government should not be putting up barriers to organisations investing in clean, renewable energy. The trade association is therefore appealing to everyone concerned about this issue to get the Government to stop the tax hike. People can do this by writing to their MP and the STA has provided a template letter on their website to help people do this. Greenpeace has also set up a petition on business rates which the STA is urging people to sign and share with friends.

The trade association also says it has been working hard to solve the problem since it became apparent last year. The STA have met repeatedly with the Valuation Office Agency (VOA), who set the rates. It achieved some success, managing to reach an agreement with the VOA for solar panels used mainly to export energy to the grid. However, the VOA have also said that on this particular issue their ‘hands are tied’.

Since then, the STA has been writing to and meeting MPs and Government officials. In October it coordinated   over 160 organisations, from companies like Ikea and Sainsbury’s to campaigning groups like Greenpeace and Friends of the Earth, to sign a letter to the Chancellor asking them to stop this hike. You can see a full list of signatories here. While the organisation has been successful in winning over some supporters, for example 51 MPs signed a motion to stop the hike and Catherine McKinnell MP asked a question in the House of Commons, the STA has been unable to secure a meeting with the Chancellor or Jane Ellison MP, the minister responsible for taxation.

Solar power is still a great way for people to reduce their energy bills whilst also reducing the emissions of harmful greenhouse gases. If the world is going to stop climate change, say the STA, we all need to do our bit, so the Government should be encouraging businesses to make investments into clean energy. If this tax rise goes ahead it will punish responsible companies. 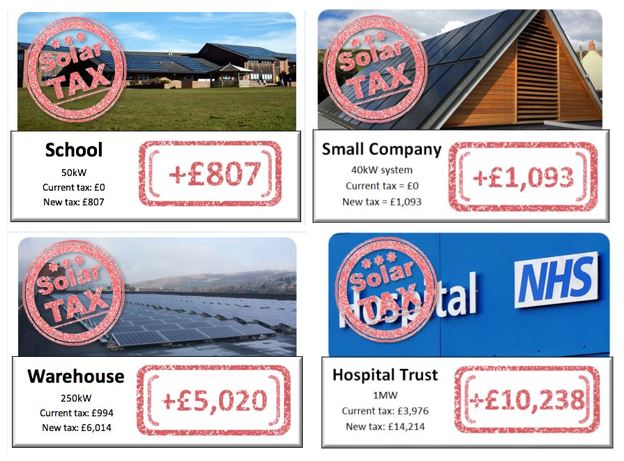 The examples above show how much different tax bills will go up. These increases may put companies off investing in the future, as well as affecting systems already built, punishing people who have already invested. In the most extreme examples, investors could actually lose money on their solar panels, which may result in dismantling and removing the panels all together.

Microgeneration schemes under 50kW are currently exempt from paying business rates. However, the Government has not indicated that this exemption will continue. The STA therefore wants a permanent exemption for microgeneration.

The STA have also pointed out that the possibility of setting up what’s called a “Special Purpose Vehicle”, a separate company that would own the solar panels, and sell the power to back to the business. This would allow the system to be taxed under the rates for “mainly export” solar sites, which are much lower. However, if businesses choose to go down this route, they would need professional advice in order to ensure payment of the correct tax. It also adds unnecessary paperwork and bureaucracy, hurting small businesses the most.

The Government doesn’t need to legislate to solve the problem. If they follow the example of combined heat and power gas plants, which were exempted from business rates in 2001, they could implement it easily through a statutory instrument - a supplement to existing laws to make them work better. This can be issued by the Government without having to go through all the normal legislative processes.