Wednesday, 27 January 2021
0
REM
The University of Richmond is now one of only two higher education institutions in the U.S., and the first in the southeast, to match 100% of its electricity needs with a single solar power source. UR’s latest solar project, Spider Solar, is a new 20-megawatt solar energy facility that replenishes the electric grid with the same amount of renewable solar energy that the campus uses to run day-to-day operations. 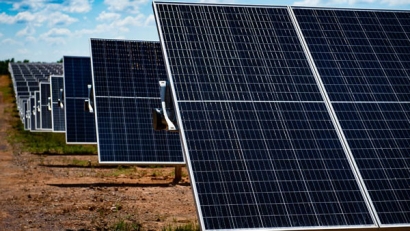 Courtesy of University of Richmond

“The University pledged in 2015 to accelerate its transition to low-carbon energy while enhancing sustainable and resilient practices across our campus,” said Director of Sustainability Rob Andrejewski. “With Spider Solar now online, UR’s greenhouse gas emissions will be 57% below where they were in 2009, putting us in a great position to aim for carbon neutrality.”

Spider Solar, which is located in Spottsylvania County, was built and is operated by sPower, which merged with AES’ clean energy business early this year. The combined business represents one of top renewables growth platforms in the country.

“Through a purchase power agreement, AES  will manage the day-to-day operations of the solar array, and UR agrees to pay a fixed price for the renewable energy it creates,” said Mark Detterick, UR’s senior associate vice president of campus operations. “By doing so, UR will be directly responsible for introducing more renewable energy onto the grid and be able to better predict the University’s utility expenses, all without the costs associated with owning or operating a large solar facility.”

Spider Solar is UR’s second power purchase agreement. In 2016, the university constructed the first solar array in the Commonwealth under Virginia’s PPA pilot program, installing 749 solar panels on the roof of the Weinstein Center for Recreation and Wellness.