Friday, 22 July 2022
0
REM
Solar energy is not subject to supply bottlenecks, is cheap and CO₂-neutral. In order to achieve a maximum energy yield, solar systems are usually installed facing south with an angle of inclination of 20 to 35 degrees. As a result, a lot of electricity is generated primarily in summer and at noon. In the future, renewable energies are to completely replace fossil fuels – a major challenge. 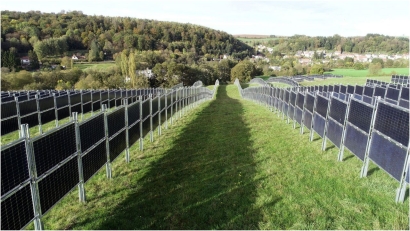 In a new study a research team from HTWK Leipzig shows it would make sense in the future to primarily install bifacial solar modules vertically and to use agricultural land for this, for example.

“Bifacial solar panels can use solar energy from both sides. Installed in an east-west orientation, most electricity is generated in the mornings and evenings. This would reduce the need for electricity storage and at the same time keep the space required for electricity generation low," says Sophia Reker from the Leipzig University of Applied Sciences (HTWK Leipzig) and first author of the study " Integration of vertical solar power plants into a future German ". energy system ”. The researchers base their argument on a simulation of the German energy system using the Energyplan software.

In order to become independent of energy imports and to reduce CO₂ emissions, the Bundestag passed an extensive legislative package for the expansion of renewable energies in Germany at the beginning of July. Accordingly, the share of renewable energies in total electricity consumption is to be increased from currently just under 50 percent to at least 80 percent by 2030. In order to achieve the goal, the framework conditions for new solar systems are to be improved, among other things.

“Bifacial solar modules are somewhat more expensive than conventional solar systems. But as they increase the number of hours of available solar power, other electricity needs, such as in gas-fired power plants, are reduced. Installed vertically, the solar systems can easily be set up on agricultural land. This creates additional earning opportunities for farmers and increases the area potential for renewable energies in Germany so much that we would only have to import a small amount of additional energy," says Jens Schneider, Professor of Networked Energy Systems at the HTWK Leipzig and co-author of the study . Solar panels installed on agricultural land can support the growth of certain crops by protecting the crops from wind and heat. Flower strips for more biodiversity are possible directly under the modules. So-called agri-photovoltaics are to be particularly promoted in the future as a result of the federal government's new legislative package.

Modeling of the energy system in 2030 as a basis

For their study, Sophia Reker, Jens Schneider and Christoph Gerhards used the Energyplan software to model an energy system for Germany which, in accordance with the German climate protection targets, would cause 80 percent less CO₂ emissions in 2030 compared to 1990. For this, the researchers assume an increase from the current 64 to 195 gigawatts of wind energy capacity and from the current 58 to 400 gigawatts of solar energy capacity. In order to actually be able to use this installed capacity, power storage is required. In their study, the researchers show that the need for electricity storage decreases if the majority of the added solar capacity is installed vertically in an east-west orientation. For example, in a scenario without additional electricity storage, this alone can save more than 10 megatons of CO₂ per year,

Sophia Reker studied energy, building and environmental technology at the HTWK Leipzig. The paper is based on her master's thesis from 2021. Reker works as a research assistant in the research group of Prof. Jens Schneider. Sustainability and climate neutrality are cross-cutting issues in research and teaching at HTWK Leipzig.