Monday, 16 May 2022
0
Shannon Flynn
People all over the world need energy but lack access to reliable power grids. Solar boxes are changing that forever. In fact, this innovation in renewable energy could be the future of renewable power. It is already changing lives across the globe and paving the way for creative solutions to today’s energy challenges. 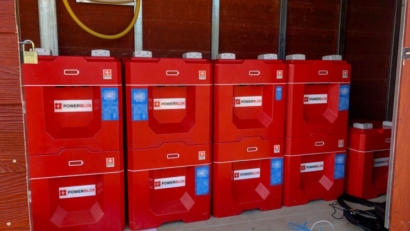 What Are Solar Boxes?

Most people have heard of solar panels, but solar boxes are likely news. So, what is a solar box? It is a combination of solar panels for collecting energy and a durable, portable battery unit for storing that energy. A single solar box could potentially power an entire home. Solar boxes can be used completely independently, no matter how far someone is from a main power grid.

Renewable energy innovator Power-Blox is leading the way in solar box technology. Their units can even run off of wind or hydroelectric power in addition to solar. Power-Blox solar boxes are extremely scalable, too. Users can simply plug multiple boxes into one another to increase their energy generation. This means that solar boxes could be used to create independent, fully renewable micro-power grids anywhere in the world.

Solar boxes are a major innovation in renewable energy, perhaps even more so than they sound like at first. After all, one may wonder what makes solar boxes different from solar panels. The answer is accessibility and functionality. Investing in conventional rooftop solar panels can be expensive and requires technical expertise for installation. Traditional diesel generators create pollution and are not renewable. Even in areas where there is a power grid, access to energy might not be reliable or consistent.

Solar boxes solve multiple problems at once, in a way that alternatives like solar panels and diesel generators cannot. Solar boxes are portable enough that people can take them wherever they are needed. This might be a home in rural Africa, but it could also be a cabin high in the mountains or simply a family looking for a reliable backup power source in case of emergencies. Solar boxes are also incredibly easy to use.

There is no need for complex installation as with conventional solar panels. In fact, the Power-Blox solar boxes are completely autonomous, removing the need for complex technical maintenance. So, anyone can use a solar box and generate power from it, regardless of technical know-how. This is a major breakthrough because it drastically expands the accessibility of renewable energy and energy in general.

Solar boxes make energy generation a single-unit, plug-and-play process since the battery is built-in. So, even when the sun goes down, solar box owners will still have all the power they need. No other currently available renewable energy generation technology can deliver this level of accessibility, ease of use, and functionality.

Of course, like any other new technology, solar boxes face challenges. Many of these are tied to existing issues with solar panel technology at large. For example, solar panels have low energy collection efficiency and numerous chemicals are often used in the manufacturing process.

The type of battery used to store energy in solar boxes may be harmful to the environment, as well, if discarded improperly. Technical research and development over the years ahead may be able to address and resolve these issues, though.

How Will Solar Boxes Impact the World?

Solar boxes are actively changing the world already. Reliable access to energy allows people to significantly improve their lives, specifically by starting new businesses. This is exactly what is happening in rural areas of Africa.

Power-Blox partnered with the United Nations Development Program, which helped the solar box developer to bring their solar units to dozens of communities throughout the African continent.

In one Mozambique village electrified with the help of solar boxes, citizens are starting new businesses with the help of their renewable energy. For example, some are making a living selling cold drinks now that they have the electricity needed to power appliances like refrigerators.

The importance of electricity for economic growth cannot be overstated. If more rural communities could be electrified using solar boxes, millions of people around the world could be empowered to start their own businesses, enriching their communities, livelihoods, and local economies. Since solar boxes are “stackable”, they enable the rapid growth of new, independent, renewable power grids anywhere in the world.

Solar boxes are also helping communities recover from natural disasters and humanitarian crises. Power-Blox has used its solar boxes to help Ugandan refugees and offered their solar boxes for aid in the 2022 Ukraine crisis. Solar box technology will also be invaluable in responding to events like tsunamis, hurricanes, earthquakes, and other natural disasters that lead to heavy power grid damage.

Solar boxes mark a crucial step forward in renewable energy technology. It is important to remember that renewable energy also relies on power storage, which is exactly what solar boxes address. By opening up the door to energy independence for millions of people, solar boxes are helping to support communities all over the world. Solar boxes could be the foundation for the renewable power grids of tomorrow, bringing energy everywhere.