Monday, 18 September 2017
0
Dan McCue
Saudi Arabia-based ACWA Power along with China’s Shanghai Electric have been awarded the fourth phase of the Mohammed Bin Rashid Al Maktoum Solar Park. Under the terms of the agreement the new facility will provide electricity at 7.3 cents per kilowatt hour. 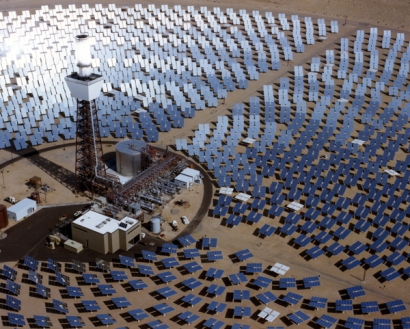 This 700 MW plant, which will be commissioned in stages with the first phase set for end of Q4 2020 will cover 3,750 hectares, the equivalent of more than 4,500 football fields. The plant will use a state-of-the-art combination of a central tower and parabolic trough CSP technologies to collect energy from the sun, which can be used to generate renewable-energy-based electricity not just during the day but throughout the night just as a gas, oil or coal fired power plant does.

Commenting on the announcement, ACWA Power Chairman Mr. Mohammad Abunayyan said, “The confirmation of our 700 MW CSP bid for the Sheikh Mohammad Bin Rashid Solar Park represents a pivotal moment for the solar industry and the efforts in the region to reach a clean energy future. ACWA Power is proud to continue to be recognised as a partner of choice by DEWA and to support the efforts of making Dubai Clean Energy Strategy 2050 a reality.”

Eng. Thamer Al Sharhan, Managing Director at ACWA Power, stated, “With the launch of this landmark project, Dubai is a pioneering model in the region and worldwide in the application of transparency, fair competition, clear policies and legislation that catalyze investment. Winning this contract stresses ACWA Power’s capability to implement this giant project, denoting that whenever granted the opportunity to a Saudi company to compete with international companies, we will prove our worth and ability to implement and achieve.”

Al Sharhan also noted that “the new project represents an added economic value for the two sister countries, Saudi Arabia and the United Arab Emirates. Also, it is in line with the Saudi vision 2030, which seeks to maximize the Saudi investment base outside the Kingdom and in line with Sheikh Mohammed's vision to transform Dubai into a global hub for clean energy and green economy through Dubai Clean Energy Strategy 2050.

The power purchase agreement and the preparation to achieve financial close are already at an advanced stage to enable construction to commence in 2018.

This renewable energy plant is anticipated to provide electricity to an equivalent of 568,000 households.

The plant will support the Dubai Clean Energy strategy 2050 to increase the share of clean energy at Dubai to 25% by 2030.