Tuesday, 07 February 2012
0
REM
The Concentrating Solar Power (CSP) market will begin rise again in 2012 and its growth will be steady and certain over the next five years, according to new research from SBI Energy. 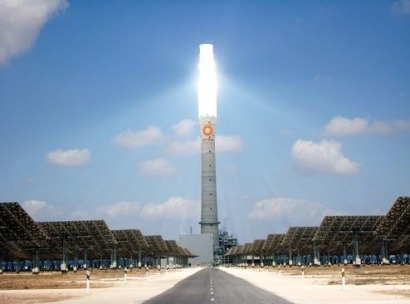 Emerging from the doldrums it entered as cheap solar PV swept into the solar market, , the global capacity of utility-scale CSP was 2 GW at the close of 2011 with approximately another 2500 to 3500 MW becoming operational in 2012. SBI Energy estimates the cost of the installed base of CSP at the end of 2011 at $9.5 billion with power tower technology increasing its market share.

Four approaches to the collection and use of the sun's heat energy are currently in use in CSP plants, although parabolic trough holds 93 percent of the installed base value.

"Thermal energy storage (TES) became a big topic in 2011 with demonstrations of 24 hour generation at a plant in Spain less than four months after startup," said SBI Energy analyst Jean Diener, author of Concentrating Solar Power (CSP), a global market research study. "Seven to eight hours of storage appears to be the norm for parabolic trough plants, with roughly an additional 10-11% of costs for the plant, but it can yield capacity factors over 50%, a key to profitability. Power towers operating at higher temperatures can achieve 10- 15 hours of storage at a slightly lower cost."

Further, CSP technology may be coupled with a traditional fossil-fuel plant to serve as daytime-demand power, or to decrease turbine sizing, or to meet regulatory requirements. Hybrid plants incorporate a solar energy fuel source with a more conventional one, typically natural gas as it is easy to transport to remote locations, doesn’t require the complicated material handling system of coal plants, is readily available in many places throughout the world and is cost competitive.

New development and construction activities will intensify in 2012 in Australia, India, and China, the report said.

China has licensed technology from eSolar and plans to build 2 GW of combined CSP/biomass plants in the next decade. India too has created a 20 GW by 2020 solar wish list. Australia continues to study the technology and is building a world study center of power tower technology.

While some forecasters believe that US concentrating solar power capacity alone will reach 6 GW by 2015, SBI Energy's analysis points to factors that suggest an installation rate consistent with the opportunities CSP represents, but is more indicative of current global economic and political realities.