Monday, 28 May 2012
0
REM
Alberto Fabra, President of the Valencia regional government, and Baldomero Falcones, Chairman of FCC, celebrated the ground-breaking ceremony last week for the solar thermal energy plant that FCC Group's Energy division is building in the city of Villena, in Alicante province (Spain). 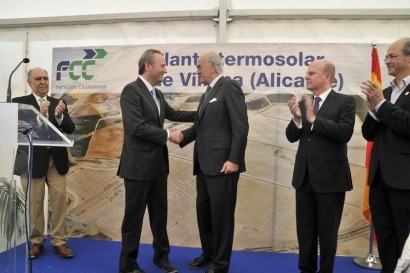 After visiting the site, Baldomero Falcones announced that construction of the new plant would create 750 direct and indirect jobs over the next two years. The 50-MW solar thermal energy plant will produce 110,000 MWh of electricity per year and cost €240 million to build.

Mr Fabra expressed his gratitude to FCC, for its investment in the region, its firm commitment to alternative energies, and its role in creating jobs. He also noted that "this first solar thermal plant joins other initiatives implemented by the regional government to promote the use of renewable energies and new technologies, saving and diversification in the energy field."

The solar thermal power plant is located at the southwest edge of the Alhorines Valley, in Villena (Alicante). The area has one of the highest levels of insolation in the Valencia region, receiving 1,900 kWh/square metres per annum. The plant, which will span 230 hectares, is located close to major highways, including the A-31, the N-344, and the CV-656.

Close to 1,000 MW of installed capacity

FCC Energy manages around 1,000 MW of installed capacity at its plants in Great Britain, Central and Eastern Europe and Spain. Outside Spain, the division has two energy-from-waste plants, in Allington and Eastcroft (UK), and is also involved in wind farm development there.