Thursday, 26 September 2013
0
Dan McCue
The Ivanpah Solar Electric Generating System successfully delivered power to the grid for the first time earlier this week, thus confirming the 377 MW solar thermal electric plant's Unit 1 is ready to start operation by the end of the year. 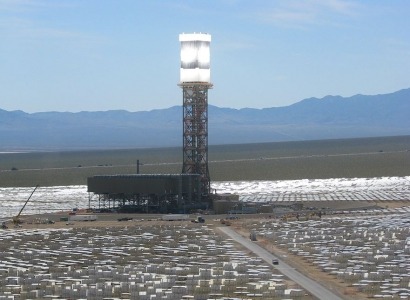 "Given the magnitude and complexity of Ivanpah, it was very important that we successfully complete this milestone showing all systems were on track," said Tom Doyle, President of NRG Solar, in a written statement.

“We couldn’t be more excited about achieving ‘first sync,’" Doyle continued, "and we share this success with our project partners, BrightSource and Google, as well as Bechtel, which is responsible for engineering, procurement, construction and commissioning on the project.”

The successful test demonstrates the effectiveness of the station’s power tower technology, which includes large heliostats that track the sun throughout the day, solar field integration software and a solar receiver steam generator.

Power generated from Ivanpah’s initial sync testing will go to Pacific Gas and Electric (PG&E), which has a power purchase agreement (PPA) for energy produced out of the plant’s Unit 1 station.

Power generated from Ivanpah’s Unit 3 station is also sold under a PPA with PG&E, while Unit 2 is under a PPA with Southern California Edison. Proof-of-concept testing will also be conducted at Unit 2 and 3 in the coming months.

“This is yet another major milestone that we have successfully achieved as Ivanpah approaches completion,” said David Ramm, Executive Chairman of BrightSource Energy, Inc. “Ivanpah is the showcase project for BrightSource’s power tower technology and technical expertise. Validation at this scale demonstrates the viability of our technology as BrightSource increases focus on international markets and applications for concentrating solar power.”

Meanwhile, Rick Needham, Director of Energy and Sustainability at Google, said, "At Google we invest in renewable energy projects that have the potential to transform the energy landscape. Ivanpah is one of those projects.”

“We’re excited about the project achieving this first sync – a landmark event along the path to completion. Congratulations to the many people who have worked so hard to get this far,” Needham added.

Located in California’s Mojave Desert, Ivanpah is the largest solar thermal plant in the world, spanning 3,500 acres of public land.