Thursday, 08 May 2014
0
REM
Masdar Institute of Science and Technology and NEST AS are planning to develop a large-scale thermal energy storage technology (TES) pilot in Masdar City in preparation for MENA’s emerging CSP industry. 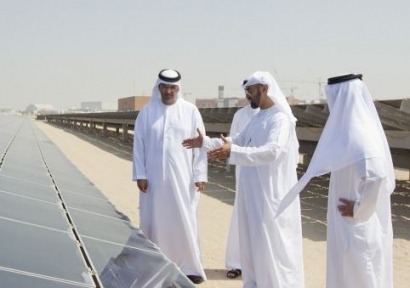 Masdar Institute’s solar energy department has been focusing on the development of concentrated solar power (CSP) and has recently launched the ‘Beam Down’ solar concentrator, a 100kWh CSP pilot plant.

The Institute is now using the ‘Beam Down’ as a way to develop TES systems and CSP components, whilst NEST has developed a module, scalable system for high temperature thermal energy.

The partnership between the Institute and NEST will lead to the development of an energy storage pilot project which will provide NEST with the opportunity to demonstrate the advantages of their new TES systems.

Given the rise in population in the MENA region, the poor grid connectivity in certain areas and the high costs of oil and other conventional powers that will become an issue in the next few years, the added value of storage that CSP has to offer means that TES is to be prioritised in the key markets for solar in the MENA region – Saudi Arabia and Morocco for example.

The main advantages than NEST has to offer are that their TES is cost-effective, flexible and a scalable solution for the storage of thermal energy at high temperatures.

As one of the key values of CSP is the added storage capacity, the importance of energy storage has also been outlined in KA CARE’s white paper in Saudi Arabia as a requirement to win CSP projects in the upcoming tenders in the Kingdom.

Other technology providers are also preparing for these tenders with the added value of TES as a selling point. AREVA Solar for example, has also recently launched their Fresnel technology with molten salt storage which will prove to more be more cost effective in the region in the long term.