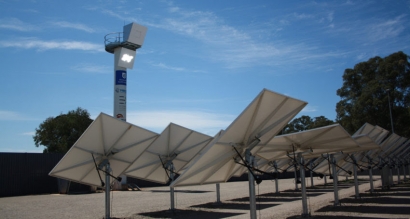 The trial includes 25 heliostats and a 16-metre-tall concentrated solar PV receiver, which can generate about 30 KW of electricity per hour.

Heliostats concentrate sunlight onto a tower, and depending on the type of receiver unit, either heat molten salt to power turbines and generate electricity or convert sunlight directly into electricity using a solar cell receiver.

The tower at the trial site can be adapted to test both technologies.

While the heliostats at the solar field are currently made of traditional glass, the researchers are working on adapting South Australian thin film coating technology to produce tough, ultra-high reflectivity mirror coatings for use on polycarbonate to make cheaper and more efficient heliostats that stay cleaner for longer.

The test site comes at a critical time for South Australia following the announcement in August that global company Solar Reserve would build a 150 MW solar thermal plant, Aurora, in the state’s north.

It also coincides with the winding down of the state’s automotive industry. Australian car manufacturing officially ends next week with the closure of Holden’s Elizabeth plant.

Precision Components has previously relied heavily on the automotive industry but is seizing the opportunity to branch out into new fields to stay afloat.

The company has also partnered with Bustech to form Precision Buses. That joint venture last year secured $2 million in South Australian Government funding to manufacture advanced diesel and electric buses on the same site as the heliostat field.

“In 10 days time Holden is going to be closing and instead of just accepting that’s the end of manufacturing, we’re imagining a new manufacturing future with projects like this,” he stated.