Thursday, 19 January 2017
0
Robin Whitlock
Capital One N.A., a diversified investor, has has acquired a tax equity stake in the Crescent Dunes Solar Energy Project with an investment of up to $78 million. 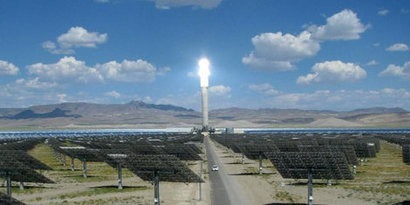 Crescent Dunes is a utility-scale solar facility featuring SolarReserve's proprietary molten salt energy storage technology, enabling day and night operation. The facility delivers 110 MW of electricity plus 1,100 MWh of energy storage to Nevada's grid under a 25-year power purchase agreement with Nevada utility NV Energy. No other existing solar project at such a scale can provide on-demand energy 24 hours a day, without any fossil fuel back up.

Leading investors around the world are looking for innovative companies and technologies that are part of the clean energy revolution, recognising the tremendous economic and job creation opportunities that renewable energy brings. Capital One is one such investor.

Over $7.7 trillion will be invested in power generation worldwide from 2013-2026, two thirds of which, about $5.1 trillion, will flow to renewables according to Bloomberg New Energy Finance. As renewable energy penetration grows, the need for cost-effective, utility-scale renewable generation with storage technology will become increasingly important for mitigating intermittency problems, delivering power into peak demand periods and supporting transmission system reliability.

“We are very pleased to announce this new partnership with Capital One” said Kevin Smith, Chief Executive Officer of SolarReserve. “US-developed innovative renewable energy technologies hold the promise of the expansion of US exports, creation of jobs in the solar industry, and strengthening of the nation's economy. SolarReserve's American innovation deployed at the Crescent Dunes facility is a model for projects around the globe.”

SolarReserve, project developer and managing investor, along with initial equity investors ACS Cobra, and Santander will maintain their ownership stake in the project, demonstrating their continued commitment to the project.

Capital One Financial Corporation is a financial holding company whose subsidiaries, which include Capital One, N.A., and Capital One Bank (USA), N.A., had $226.0 billion in deposits and $345.1 billion in total assets as of September 30, 2016. Headquartered in McLean, Virginia, Capital One offers a broad spectrum of financial products and services to consumers, small businesses and commercial clients through a variety of channels.