Tuesday, 13 September 2011
0
REM
The Spanish solar thermal electric trade association, Protermosolar, has announced that 4,293 square kilometres of concentrating solar power (CSP) plants (equivalent to 1% of Spain’s territory) could supply the country with all the power it needs. The CSP Markets Report 2011-2012 details the current plan in Spain, to install 5,000 MW of CSP… but the industry is hoping and lobbying for 10,000 MW by 2020. 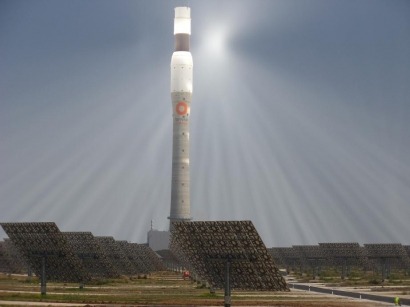 Hopes are high for CSP in Spain. The CSP Markets Report 2011-2012 describes in detail how the Spanish Ministry of Industry has granted permission for the construction of 61 plants in 11 provinces, mainly in the south. 21 are currently operational with an installed capacity of 852.4MW, with 40 further plants under construction, pre-assigned and pending construction. When all plants have entered service in 2014, the country will have 2,525.3MW CSP capacity.

Spain’s track record sends an encouraging message to newer entrants in the CSP market from India to South Africa and beyond. When Spain started building plants in 2007, the first plants such as PS10 and Andasol 1 were highly dependent on imports of foreign supplies, requiring at least 50% of the requisite parts to be sourced from abroad. The plants that went online in 2010 were built with around 80% of components from Spanish companies.

And soon, a favourable regulatory environment attracted manufacturers to Spain, helping to creating an indigenous market for components such as glass, tubes, steel structures and pumps. The Spanish success has also demonstrated how the industry can be very important for regional development. As a relatively labour intensive technology, the amount of jobs that can be created from the inception of a single plant is higher than plants using other renewable technologies.

It’s undeniable that CSP in Spain faces a challenging year. Changes to feed-in-tariffs and threats from competitive energy sources have thrown the industry into turmoil in recent months. But the CSP industry worldwide is ready to learn from the Spanish experience – both good and bad, and with a strong track-record, the outlook is bright.

The CSP Markets Report 2011-2012 offers not only an overview of the Spanish industry but top level analysis of the lessons learned from Spain and the opportunities available for emerging industries from Morocco to Australia and beyond.