Tuesday, 04 October 2011
0
Toby Price
Last week saw the opening of the Andasol 3 solar thermal electric plant by a consortium of five German companies in the Spanish province of Granada. The completion of the third Andasol power plant on a site measuring some two square kilometres sees the creation of “the largest European solar power plant”, which will supply clean power to the city of Munich. 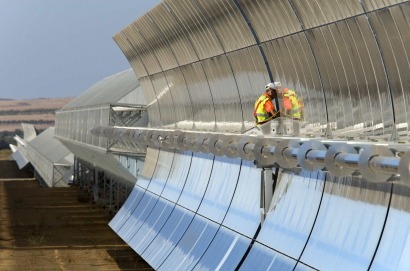 Attending the inauguration ceremony of the Andasol 3 solar thermal electric plant were the General Secretary of Industry and Energy for Andalusia, Isabel De Haro Aramberri, as well as board members of those companies with a stake in Andasol 3: Stadtwerke München (Munich City Utilities), RWE Innogy, RheinEnergie, Ferrostaal and Solar Millennium.

Commenting on the facility, Dr. Kurt Mühlhäuser, Chairman of the Stadtwerke München managing board, said: "Andasol 3 is a perfect example of how the energy transition needs to be realised at a European level. It can only succeed if the various parties involved – as here at Andasol 3 – are united in a common aim and if the political conditions are favourable”.

Mühlhäuser reveals that with the help of facilities like Andasol 3, Munich aims to be producing enough green electricity in its own installations by 2025 to be able to meet the demand of the whole of Munich – that's 7.5 billion kilowatt hours. “Munich will thus become the first city in the world with over a million inhabitants to reach this target. With the ten-fold increase in our production capacity –already up and running or still in the planning – we are making huge strides in the right direction," he said.

Construction on Andasol 3 began in mid-2008. Thanks to high local levels of direct solar irradiation, Andalusia is one of a handful of locations in Europe that is ideally suited to solar thermal power generation. The power plant, with an installed output of 50 megawatts, was completed on schedule this summer.

It is currently running in test mode; commercial operations are due to begin in the coming weeks. From that point on Andasol 3 will generate approximately 165 million kilowatt hours of electricity a year, saving some 150,000 tonnes of carbon dioxide when compared with a modern hard coal-fired power plant. In all, the three more or less identical Andasol power plants can meet the electricity needs of about half a million people using power generated by solar energy.

"Andasol 3 proves that converting Europe's electricity production methods can be achieved far more efficiently if we take an international approach, rather than pursuing national concepts. I see this power plant as a role model for the rest of Europe; it may even generate the impetus needed for the development of a European market with common regulations for renewable energy sources," commented Dr. Hans Bünting, Chief Financial Officer of RWE Innogy.

The Andasol3 power plant is made up of approximately 205,000 parabolic reflectors. By using a thermal storage tank, any electricity generated during the day can subsequently be supplied on demand for up to eight hours. At peak times up to 600 people were involved in the construction of the power plant. About 50 permanent jobs in the operation and maintenance of the facility have been created.

"With the swift phase-out of nuclear energy and the huge challenges posed by the move towards renewables, with the new forms of power generation this entails, the involvement of the German municipal utilities is vital. The companies in Germany's major cities in particular need to come up with innovative ways of meeting future energy needs. Our portfolio of renewable energy sources to date has mainly focused on wind, biomass and photovoltaic systems. With Andasol 3 we are investing in production technology which is likely, alongside wind and hydroelectric power, to become a major component of European energy supply", commented the managing director of RheinEnergie, Dr. Dieter Steinkamp.

Meanwhile, Joachim Ludwig, executive board member with Ferrostaal AG believes the market potential of solar thermal power plants to be “immense”, while Christian Beltle, member of the executive board of Solar Millennium highlights that Spain has adopted a pioneering position in promoting this technology and has thus created the first European market for solar thermal power plants. As one of the prime movers, Solar Millennium was quick to recognise this potential and has consistently addressed its expansion. We were responsible for planning the three Andasol power plants and were involved in every single stage of their development – from initial concept to completed facility. The inauguration of the third power plant in this location is visible confirmation to us of our successful work in recent years."