Thursday, 16 December 2021
0
Robin Whitlock
Aalborg CSP has received an order to supply its header-coil heat exchanger for steam generation and molten salt circulation system for the Kyoto Group project for a thermal energy storage to be established at Aalborg Forsyning’s green test centre at Nordjyllandsværket. 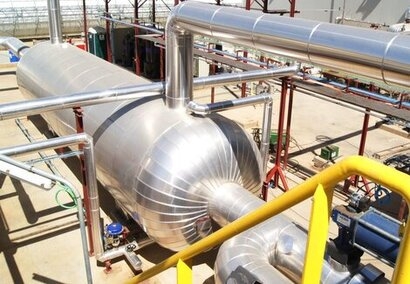 Rather than demolishing all coal-fired power plants in both Europe and globally over the next decades, Aalborg CSP expect a trend for the coming years with conversions of existing coal fired plants into being profitable producers of green and sustainable energy streams such as electricity and heat as products.

Several international reports and studies show the need for large scale storages to balance the increased renewable energy share of the energy mix. Energy storage with PTXSALT, such as the HeatCube, which is utilising the sustainable mass of molten salt as storage medium of high temperature energy in the range of up to 525º C is ideal. This can, on demand, enable green power supply which can be used for power production for daily and weekly load shifting in the electricity grid as well as for constant power supply for well-known PTX technologies such as hydrogen and methanol production.

Electricity from, for example, wind turbines will be stored in a modular storage solution after which the energy, on demand, is converted back to steam, to be used for green district heating and potentially for green power production for the residents of Aalborg city.

The PTXSALT plant in Aalborg will be the first of its kind in Northern Europe, however, the molten salt technology has been utilised within the CSP (Concentrated Solar Power) industry for plants in Spain, the Middle East, and the US for decades. Experience from existing molten salt storage and header-coil equipment has proven the technology to be scalable, more economical, and bankable compared to other large scale energy storage technologies commercialised to date.

The Aalborg CSP scope of the project consists of supplying the heat exchanger of the header-coil type for steam generation, as well as design of the integrated molten salt and steam system connected on one side to the molten salt storage tanks and on the other side to the header-coil steam generator. In doing so, Aalborg CSP will be working closely together with Kyoto Group on their entire HeatCube system aiming at storing excess renewable electricity in a thermal battery with molten salt (PTXSALT), and generating steam when energy is needed in terms of district heating for the city.

“Aalborg CSP was the natural choice for us when looking for a partner for the project at Nordjyllandsværket” said CEO Christopher Kjølner from Kyoto Group. “Their significant experience with thermal engineering and the ability to deliver a heat exchanger system for steam solutions tailored for the HeatCube has already impressed us at Kyoto Group. We look forward to our further collaboration on this project.”

The header-coil heat exchanger system from Aalborg CSP together with the HeatCube PTXSALT plant can be considered a green base-load plant and reuse parts of the existing infrastructure such as the steam turbine and thereby form the basis of future conversions of existing Coal Fired Power Plants.

Aalborg CSP’s customer, Kyoto Group, is the project developer and owner of the PTXSALT thermal energy battery plant, which is their first commercial project using the modular HeatCube technology. The HeatCube technology is a scalable PTXSALT storage solution, which can support the transition towards a green and sustainable energy sector – both for industrial size plants and for utility scale projects.

The project has been created as a close cooperation between Aalborg CSP and Kyoto Group to develop a system combining the header-coil heat exchangers with the HeatCube technology in order to create a reliable solution for the client, Aalborg Forsyning.

The Aalborg CSP header-coil heat exchanger technology is designed to withstand high pressure, high duty, and transient operation. Moreover, the technology meets the large requirements for thermal performance as well as the requirement for a fast ramp-up when needed. Finally, the technology is the only existing heat exchanger type with high long-term reliability and efficiency under cyclical load conditions, which is a critical point of focus for the PTXSALT plant.

Aalborg CSP has delivered heat exchangers all over the world for more than a decade and holds a proven track record of more than 10 years leakage-free operation in different operating conditions resulting in higher availability and profitability. In terms of molten salt heat exchangers and steam system the track record is likewise long; however, all projects have until now been delivered to destinations outside of the Danish borders. With a project within the borders of their home country, Aalborg CSP hope to demonstrate that the technology is the most competitive solution with a mature technology readiness level.