Monday, 28 June 2021
0
Robin Whitlock
A group of neighbours from Brixton in London, UK, have trialled a first of its kind smart local flexible energy market, after a new battery was installed alongside existing solar panels at their block of flats. 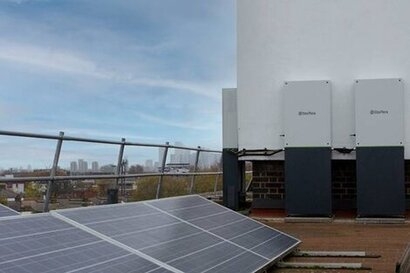 The ‘Urban Energy Club’ project recently advanced to offering simulated ‘flexibility services’ to the distribution network after a 10kW/20kWh battery system was connected to the pre-existing 37kWh solar PV system installed on the roof of their building.

A three-month live trial has seen residents get involved in the emerging digital energy world, by offering simulated flexible power services from the new battery to respond to supply and demand in the area. By generating electricity and storing it for later, the system can flexibly respond to signals from the electricity network, with residents saving money on their bills for providing the service.

Through the trial, residents saved around £7.50 on their monthly electricity bills* from using the solar energy as well as providing these flexibility services to UK Power Networks. The solar energy produced also helped provide, on average, 42 percent of household electricity.

The installation of the battery and the introduction of flexible power services are the latest milestones in the second phase of the project, which already enables residents to trade electricity generated from a solar panel system on the roof with one another (peer-to-peer) using blockchain technology.

“Improving my carbon footprint is really important to me, so to be able to be involved in this trial makes me feel like I am doing my bit for the environment, whilst saving me money each month” said Shirley Wynter, an Elmore House resident involved in the project, speaking on the benefits she’s seen so far. “I like the way I receive the top up rebates rather than just a discount, and if I have any solar electricity leftover, I can share it with my neighbours, and they can share it with me.”

Commenting on the updates from the project, Rebecca Rosling, Head of Smart Customers at EDF R&D UK Centre, added that the project demonstrates not only how densely populated areas can access renewable energy at a lower cost, but also how the power network can benefit from our renewable assets as well.