Senftenbacher to produce bricks with energy storage from EnergyNest

Tuesday, 28 January 2020
0
Robin Whitlock
The thermal battery specialist, EnergyNest, has announced it will install a large thermal energy storage battery at the Austrian factory of Senftenbacher, a leading brick manufacturer, significantly reducing their fuel use and saving at least 1,500 to 2,000 tons of CO2 per year. 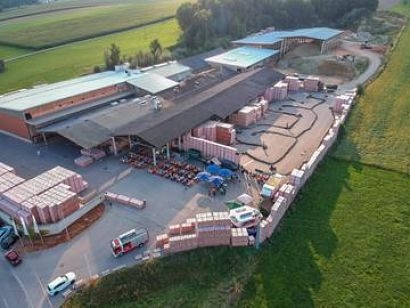 Senftenbacher is EnergyNest’s second customer for its unique energy storage system. The planned thermal storage facility with a capacity of 6-8 megawatt hours will temporarily store excess energy in the form of hot air from a tunnel furnace. The stored heat is converted into steam and later reused in production. In reusing this energy, the thermal battery can completely replace natural gas as an energy source in a later production stage. Previously unused waste heat thus becomes a primary energy source. As a result, the costs for natural gas as well as at least 1,500 to 2,000 tons of CO2 per year are saved.

“The project with Senftenbacher demonstrates that decarbonisation of major industrial energy users is already technically possible and economically interesting today. We are delighted that our thermal batteries are now being used industrially for the second time. This underlines our global leadership in thermal storage. We are the first company to offer and already install market-ready thermal storage systems for the industry.  The planning phase for the project is already underway. In the second half of the year we can start the production process and installation” said EnergyNest Managing Director Dr. Christian Thiel.

Peter Flotzinger, Managing Director of Senftenbacher, added that the company takes its climate responsibility very seriously and is therefore sending a clear signal with this decarbonisation project. The company will soon be supplying bricks that not only insulate particularly well, but also have the lowest CO2 footprint on the market. This will create more sustainable buildings and homes.

With this project, Senftenbacher is taking a big step towards reducing the CO2 emissions of its industrial production.

Bricks, like many other building materials, are very energy-intensive to produce. The required energy must be provided in the form of high-grade heat or steam - for example, for mixing the clay, drying and burning the bricks. Today, the required process heat is largely generated with natural gas. The use of natural gas for heat or steam generation is a widespread industry standard.

Due to the high degree of innovation and the great decarbonisation potential of the thermal battery, the European Union supports the joint project of EnergyNest and Senftenbacher within the Horizon2020 SME-I program. The EU milestone project thus sets a new standard for the decarbonisation of industrial production.