Tuesday, 22 March 2022
0
Robin Whitlock
Researchers at the Solar Energy Institute of the Universidad Politécnica de Madrid have developed a system that allows large amounts of renewable electricity to be stored and to supply heat and electricity on demand, which could reduce our dependence on fossil fuels. 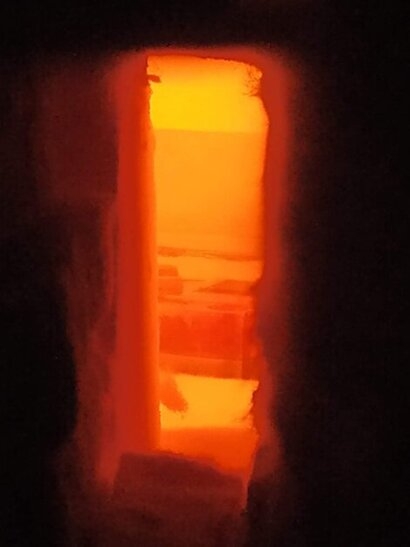 Natural gas prices are skyrocketing around the world and have led to record prices for heating and electricity. On the other hand, the rise of renewable energy sources, such as solar and wind, is creating a new paradigm in the energy sector: more and more electricity is produced when there is no demand. And this is causing much of this electricity to be lost. In this situation, it might seem logical to harness that surplus renewable electricity to produce heat and power when needed. However, we are faced with a technological problem: we lack a system that is capable of storing and producing this energy economically on demand.

Researchers at the Solar Energy Institute of the Universidad Politécnica de Madrid (IES-UPM) have found a possible solution: a system that could store large amounts of renewable electricity for long periods of time very cheaply and provide heat and electricity on demand.

The system, described in a recent article in Joule, uses surplus generation from intermittent renewable energy, such as solar or wind power, to melt cheap metals, such as silicon or ferrosilicon alloys, at temperatures above 1,000°C. Silicon alloys can store large amounts of energy during its fusion process. This type of energy is called “latent heat”. For example, a litre of silicon stores more than 1 kWh of energy in the form of latent heat, which is precisely the amount of energy contained in a liter of hydrogen pressurised at 500 bar. However, unlike hydrogen, silicon can be stored at atmospheric pressure, making the system potentially cheaper and safer.

A key to the system refers to the way that stored heat is converted into electricity. When silicon melts at over 1000ºC it shines like the sun. Therefore, it is possible to convert radiated heat back into electricity using photovoltaic cells. So-called thermophotovoltaic generators are like miniature photovoltaic installations that can produce up to 100 times more energy than a conventional solar power plant. In other words: if a square metre of solar panel produces 200 W, a square metre of thermophotovoltaic panel produces 20 kW. And not only the power, but the conversion efficiency is also higher. The efficiency of thermophotovoltaic cells ranges between 30 and 40 percent depending on the temperature of the heat source. Comparatively, commercial photovoltaic solar panels have efficiencies between 15 percent and 20 percent. The use of thermophotovoltaic generators, instead of conventional heat engines (such as Stirling, Brayton, or Rankine cycles), avoids the use of moving parts, fluids, and complex heat exchangers. In this way, the whole system can be made economical, compact, and silent.

According to the study, latent heat thermophotovoltaic batteries could store large amounts of surplus renewable electricity.

“A large part of this electricity will be produced when there is no demand, so it will be sold at very low price in the electricity market” said Alejandro Datas, the IES-UPM researcher who leads the project. “It is therefore essential to store this electricity in a very cheap system since it would not make sense to store something so cheap in a very expensive box. Therefore, storing surplus electricity in the form of heat makes a lot of sense, since it is one of the cheapest ways of storing energy.”

In particular, silicon and ferrosilicon alloys can store energy at a cost of less than 4 euros per kWh, which is 100 times cheaper than current stationary lithium-ion batteries. The total cost will be higher after incorporating the container and the thermal insulation. But, according to the study, it would be possible to reach costs of around 10 euros per kWh if the system is large enough, typically more than 10 MWh, since the cost of thermal insulation would be a small fraction of the total cost of the system.

The fact that only a fraction of the stored heat is converted back to electricity is not necessarily a problem. If the system is cheap enough, it would be enough to recover only 30-40 percent of the energy in the form of electricity to make them preferable to other more expensive technologies, such as lithium-ion batteries. Additionally, the remaining 60-70 percent of heat that is not converted to electricity can be delivered directly to buildings, factories, or cities, reducing your natural gas consumption. Heat accounts for more than 50 percent of global energy demand and 40 percent of global CO2 emissions. In this way, the storage of wind or photovoltaic energy in latent heat thermophotovoltaic batteries would not only allow substantial cost savings but would also satisfy part of this great demand for heat through renewable sources. For this reason, “developing this type of system can be key to reducing our dependence on fossil fuels, not only in the electricity sector, but also in the thermal sector” said Mr Datas.

The first laboratory-scale prototype of the system that has been manufactured within the framework of a European project (AMADEUS) is now available at IES-UPM, and the first experimental results have been published in this study. This is the culmination of more than 10 years of research at IES-UPM. However, the technology still needs a lot of investment before it can reach the market. For example, the current laboratory prototype has less than 1 kWh of storage capacity, but energy storage capacities of more than 10 MWh are needed for this technology to be profitable. Therefore, the next challenge is to scale up the technology and test its feasibility on a large scale. To do this, IES-UPM researchers are already putting together the team that will make it possible.