Tuesday, 31 July 2012
0
Toby Price
Brit, Eric Hawkins, entered the solar thermal industry in 1991 when renewables were very much in their infancy. Now, 20 years later, the 65 year-old – who says his innovative mind keeps him busy – is looking for new business opportunities. He recently established the company Solar Speed Flex, highlighting that he isn’t prepared to cash his pension and put his feet up just yet. 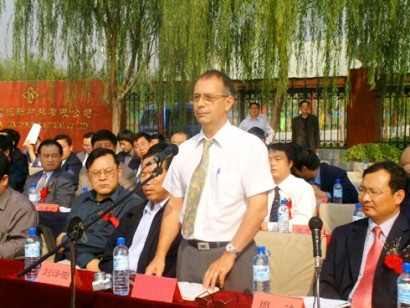 Eric Hawkins is a born entrepreneur and even now, at retirement age, he is still looking for new ways to drum up business. He started his first solar thermal enterprise way back in 1991, spending five years in Cyprus, developing and testing solar systems. Through Cyprus he became Sunda’s agent for the UK, where he returned in 1998. In 2003, Hawkins started a collaborative partnership with Mick Humphries, now the CEO of Apricus, being the co-designer and developer of Apricus brand solar collectors. In 2004, he opened up the US market for Apricus, which became one of the most important for his company.

Then, in 2007, Hawkins set up a joint venture, Suntech Solar, with a Chinese business woman in Beijing, to develop and produce his own solar thermal collectors. He successfully established exports to the UK and US, however the recent banking crisis and recession put back further expansion plans, and ultimately forced Hawkins to wind up his UK business, leading to the loss of 7 jobs and Hawkin’s retirement pension.

At 63 years old and facing a bleak future, Hawkins did not give in and took the choice to look for a new partner in China to develop the first product (a plumbing system package for the hundreds of Chinese exporters of just solar collectors) in what would become an expanding portfolio for his new company, Solar Speed Flex.

Currently, Solar Speed Flex has partnered with five quality solar collector manufactures in China and is prepared to offer overseas buyers not just the solar installation components (collectors, PV panels, etc.), but also a tailor-made installer package. “The buyer can be assured that the solar collectors he/she orders from a Chinese manufacture comes with the key parts that connect the collector to the tank or thermo siphon system, as well as the correct pipe and insulation tubing to suite that design,” Hawkins explains. “The package combined with PV panels and LED lightning creates a value alternative for the traditional grid energy/ thermo installations. “

“In Solar Speed Flex we are strongly motivated in finding innovative and high quality renewable solutions, which bring added value to our clients. We believe our quest will result in shifting the human perception about the pervasive availability and effective use of the energy resources, transformation of ‘traditional’ houses into the independent off-grid properties, and changing engineering of existing industrial processes, altogether supporting global efforts in the carbon footprint reduction;” explains Hawkins.

An example of this focus on distributed energy generation is the 1.2-kW, off-grid lithium battery storage system also offered by Solar Speed Flex. Hawkins explains that as the risk of floods, high winds, hurricanes and heat waves through the effects of climate change rises, causing power failures as happened in Scotland last winter when 10,000 homes had no power for two weeks, heat waves in the US shut down power stations and the worst floods and high winds in Beijing for 60 years, the need for independent power sources is rising.

“Being in the dark in winter when it is cold outside and inside, with no boiler working as they needs a circulating pump and 40 watts of power, is all in the hands right now of the power companies,” he says. “Our off grid lithium battery storage system of 1.2kW can power many LED lamps and with a change of circulating pumps to A-rated, 5-watt variable speed pumps, home owners can enjoy hot water and heating as well, even during power cuts.”