According to Eurobserv’ER, the hot-water and heating-dedicated solar thermal market contracted by 1.9% in 2011, but less than in 2010 and the authors of the latest barometer forecast that “improvements might be ahead”. 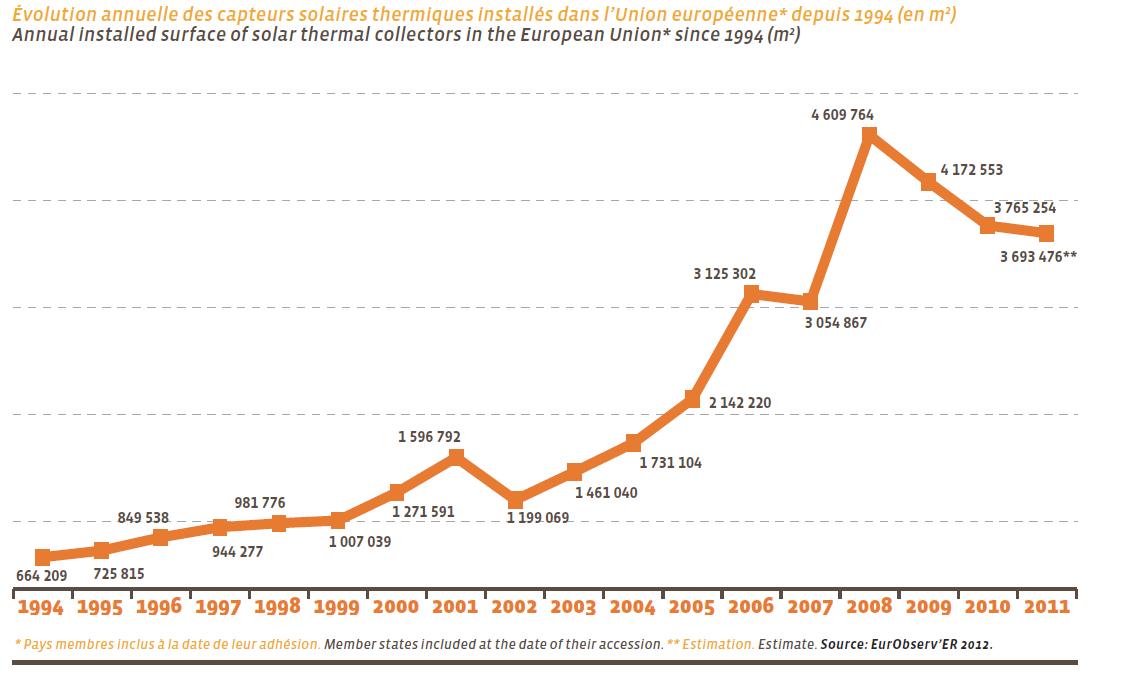 On the downside, “the financial crisis of 2008 and subsequent recession continue to hurt the construction sector, particularly in Southern Europe so the tightening of its technical standards has yet to make a decisive impact on the Spanish, Italian and even French markets”.

The report also finds that “competition is stiffer between solar thermal and conventional heating systems other than oil-fired, as most European countries, being cash-strapped have slashed their solar thermal incentive subsidies”. Solar thermal has also had to contend with another solar PV market boom, “Consumers perceive PV as much more profitable than solar thermal,” highlight the authors.

By technology, glazed flat plate collectors continued to enjoy a dominant 84.3% share in 2011, even though the market share of vacuum tube collectors has picked up slightly (11.7%).

The performance of the main European Union markets varies considerably. On the positive side, the German market is returning to growth, the Polish market is building up and the Greek market is holding up well. However, the Spanish, Italian, French, Austrian and Czech markets are shrinking.

In contrast, the latest Eurobserv’ER solar thermal barometer finds that the concentrated solar power market has been forging ahead, and in 2011 recorded installed capacity surpassed the 1 GW mark in Spain – still the only European Union country to have developed a large-scale CSP sector, for the first time.

At the end of 2011, Spain concentrated all of Europe’s commercial CSP operations within its borders, with 1,151 MW of installed capacity. If we add the capacity of the four prototypes commissioned in the European Union, total European Union capacity was 1,157 MW at the end of 2011. Nine commercial CSP operations went on stream in 2011 (a combined capacity of 420 MW) – all of them in Spain. Eight of them are of the parabolic trough type each with a unit capacity of 50 MW, while the ninth is a 20-MW capacity tower plant.

According to the barometer, France has planned its first CSP plants for 2014: a 12-MW plant (Alba Nova 1) being developed by Solar Euromed on the island of Corsica, and a 10-Mw unit at Llo in the Pyrenees being developed by CNIM.

For the time being, the French only has two prototype plants (which use Fresnel technology); one installed in July 2010 at la Seyne-sur-Mer by CNIM, and the other installed in November 2011 at Targasonne by Solar Euromed.

Meanwhile, Italy is laying the groundwork for CSP in the future after a 5-MW parabolic trough plant was installed by Enel Green Power in on the island of Sicily. The Archimede project will boast seven hours of heat storage thanks to a molten salt tank. Other large-scale projects are currently at feasibility stage for sites ion Southern Italy.

But what are the prospects for Europe’s CSP sector in 2020? According to the barometer “the fallout of the economic crisis that has besieged Europe is affecting CSP plant project developments. Most countries that had set CSP plant targets in their National Renewable Energy Action Plans are drifting off course”. 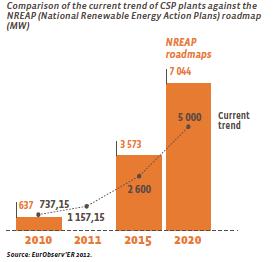 The authors conclude that while long-term prospects for growth are still good, except for Spain, the other European Union countries have yet to pass the demonstrator stage if they are to envisage installing commercially-viable CSP plants. Furthermore, CSP faces stiff competition from PV, whose production costs have been slashed; another factor that could stunt CSP roll-out.