Thursday, 09 November 2017
0
Robin Whitlock
The North American wind energy market is aging, with the majority of installed wind-turbine equipment averaging more than five years in age, according to a new study by IHS Markit. 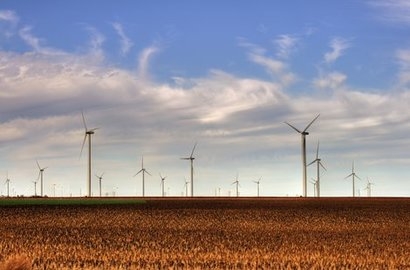 According to the study, the operations and maintenance (O&M) expenses accompanying US wind operations are now costing the industry $3 billion to $4 billion annually.

IHS Markit estimates total O&M spending for the wind energy sector will exceed $40 billion, cumulatively, from 2015 to 2025. The US Bureau of Labor and Statistics, which is keen on the potential for employment in the sector, estimates wind energy technicians will be the fastest growing occupation and will more than double in demand during the next seven years.

“The average age of the North American wind fleet will rise from 5.5 years in 2015 to 7 years in 2020, and to 14 years in 2030” said Maxwell Cohen, senior research analyst at IHS Markit. Cohen, along with Ryan Siavelis, senior research analyst, at IHS Markit, is co-author of the 2017 IHS Markit Wind O&M Benchmarking in North America: Summary of Key Findings. “Along with that, equipment maintenance and operating costs are increasing significantly, leading operators to focus on performance optimisation and cost management. We designed this study to help wind-asset owners compare the performance of their projects against the market as a whole, as well as to help them determine the optimal O&M strategy for their business.”

Cohen added that, though it may seem counterintuitive, first-year start-up costs are quite expensive as problems with new equipment are addressed, then, as projects age, there is a spike in costs for equipment maintenance at about the five-year mark through to 10 years of operation. Some wind installations in California date back to the 1980s, so you have a wide variety of equipment and installations, and there is a real need for some comparative analysis to help the industry assess and manage operations and maintenance costs.

“The IHS Markit benchmarking analysis includes input from many of the largest wind project owners and operators who asked IHS Markit to fulfill their need for concrete, standardised data and analysis to help benchmark the cost and performance of wind-farm operations” Ryan Siavelis said. “There was a void in the market for this type of analysis.”

The IHS Markit report comprises data from nearly 300 wind projects, representing 30,000 megawatts (MW) of capacity and nearly 20,000 turbines installed in North America (about one-third of the market). Project start dates range from 1994 to 2016. The data represents more than 115,000 turbine-years of operational history, and gives study participants the ability to track projects and turbine performance over time. The IHS Markit study includes data on wind turbines manufactured by more than 15 turbine OEMs.

Currently, more than 50,000 utility-scale wind turbines comprising nearly 100,000 megawatts of generating capacity are installed in 42 US states and 12 Canadian provinces and territories, with an average age of six years. By the year 2030, IHS Markit expects those numbers to increase significantly. More than 70,000 wind turbines will generate more than 150,000 MW of power in the US and Canada.

“The age of that capacity in 2030 will make the O&M business very lucrative, which is why so many players are expanding into this sector of the business” Siavelis added. “We see new entrants from across the value chain competing for wind O&M service agreements. Original equipment manufacturers (OEMs) including Suzlon, Siemens Gamesa, MHI and Vestas are becoming more active in offering to service turbines manufactured by other OEMs, for example.”

Suzlon and MHI, which have both shuttered US manufacturing, are re-focusing in the US as service companies for their respective 6.4 megawatts of combined installed wind turbines, as well as for other OEMs, said the report. E.ON Climate & Renewables is the latest wind independent power producer (IPP) to launch a business serving turbines owned by others in 2015, following in the footsteps of EDF RE and Duke.

O&M costs are lowest in the first year of operation, but only slightly. During the first 10 years of a wind turbine’s operations, costs average between $42,000 and $48,000 per MW, IHS Markit said. There is, however, a great range of costs from project to project, with age, location, and O&M strategy all being important factors.

As projects continue to age, direct O&M costs (that is, the direct cost of actually maintaining the turbines) increase while indirect costs (for example general site administration and other business services) remain steady or even decline, leading to mostly stable total costs on net. However, a wide variation in costs exists for wind projects depending on size of the installation, equipment used, and whether maintenance costs are managed by the OEMs, by independent service providers (ISPs), or by operators themselves.

The median O&M cost for a project with a full-wrap warranty was slightly more than $48,000 per MW per year in 2016. After the warranty period, the median costs for projects maintained by OEMs and ISPs were nearly the same, while the median cost for projects moved in-house was 19 percent lower. The study indicates that substantial cost savings can typically be obtained by switching to self-performance, but the authors caution that the data set used in this study is weighted toward large owners that are experienced in self-performance of maintenance.

“Performing their own O&M can be risky for owners who do not have a track record of conducting maintenance,” Cohen said. “These turbines are massive, complicated machines, containing thousands of parts perched 25 stories or higher above ground. Our study found that one-quarter of all turbines’ gearboxes need replacement during just the first decade of operations. Owners that perform their own O&M need to coordinate labor, spare parts, and cranes for this sort of complicated turbine maintenance, all while minimizing turbine downtime. These owners may have projects using turbines built in different years by different OEMs that are spread all across North America in remote locations, so doing their own O&M is a major undertaking.”

Contracting with an ISP can provide greater flexibility, but the IHS Markit report found that ISPs have a mixed record when it comes to cost savings. ISPs, IHS Markit said, have a ‘long-tail’ of projects in the bottom quartile in terms of cost savings, and owners should note that savings may not be as great as expected in low-performing projects.

“The key here is that there is no one-size-fits-all strategy for wind operators,” Cohen said. “Our goal was to provide a comprehensive assessment of the entire O&M market, so wind asset owners can select the O&M strategy that best balances cost, convenience, and risk profile for their particular portfolios of wind projects.”

IHS Markit is a world leader in critical information, analytics and solutions for the major industries and markets that drive economies worldwide. The company delivers next-generation information, analytics and solutions to customers in business, finance and government, improving their operational efficiency and providing deep insights that lead to well-informed, confident decisions.