Monday, 11 October 2021
0
REM
The Aransas Terminal Company announced it has re-envisioned and re-launched the marine terminals of Harbor Island, to serve the booming wind energy project cargo business and the offshore south Texas oil industry supply and service sector. While current wind component shipments through the port are destined for the onshore renewables sector, there is also long-term potential for offshore wind component fabrication and supply. Having no bridges to cross under and therefore no air draft restrictions whatsoever will give great flexibility to future offshore wind farm developers that chose Aransas Terminal as a service base. 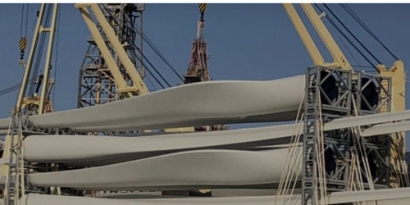 “With 3,000 linear feet of berth space, more than 120 developed acres, and 1,000 feet of frontage along Highway 361, the marine and landside facilities are already in business, handling project cargo operations and offshore oil and gas berthing and logistics,” said Burt Moorhouse, president of ATC.

The port facilities at Harbor Island were introduced following the dredging of the Aransas Pass in the late 1890s and predate the establishment of the Port of Corpus Christi. Harbor Island’s marine facilities have a rich history that includes extensive shipyard work, particularly in the fabrication of offshore oil production “jackets” of the 1970s.

The port has long-served as an offshore oil lay-up base, which will continue, albeit at a different level. ATC envisions a gradual transition away from lay-berthing as current economics lead to more scrapping of older offshore rigs.

Moorhouse said, “There is great opportunity for a more active Gulf of Mexico offshore drilling and production supply vessel base at Aransas Terminal. As the cold-stacked rigs depart, docks and terminals are being freed up. It’s a natural transition, in keeping with the port’s offshore energy legacy, to now serve offshore south Texas discoveries, as the industry can avoid the expense of that long run to Louisiana for fuel and supplies.”