Monday, 18 March 2019
0
REM
BayWa r.e. is currently installing the tallest wind turbines in France. The Senvion wind turbines reach 200 meters in height at their tip. The Les Landes wind farm consists of six wind turbines with a total output of 18 MW and is located in the French region of Haute Vienne. 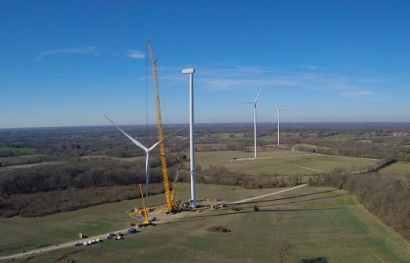 "We decided to install these taller wind turbines in order to capture a stronger and steadier wind, and optimize electricity yields. In total, this wind farm is expected to produce more than 50 GWh per year, which is enough to power (approximately) 10,000 households."said Can Nalbantoglu, Managing Director of BayWa r.e. France SAS

The Senvion 3.0M122 wind turbine has a nominal power of 3 MW. The tower is composed of six sections with a total height of 139m. The 61-metre blades are assembled on the hub at ground level, before being set on the nacelle at the top of the tower. The wind farm will save an estimated 11,500 metric tons of CO2 emissions every year.

Olivier Perot, Managing Director of Senvion Europe South, concluded, "We are proud to have contributed to the success of this project with the tallest wind turbines in France – another milestone for the success of the country’s energy transition."