Monday, 16 October 2017
0
Robin Whitlock
Engineers at Brunel University in the United Kingdom are developing a digital platform for wind farms that increases efficiency and cuts costs. 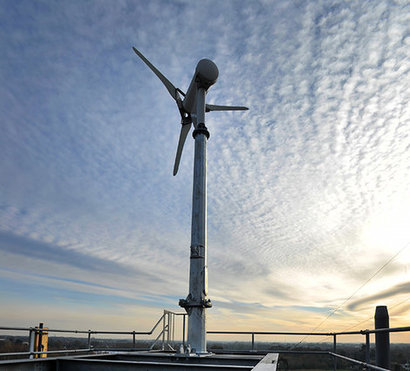 WindTwin will act like a pilots’ control panel for wind farm managers, giving them live condition checks on each turbine’s working parts. It has been designed to feed data from sound sensors on the turbines’ gearbox, generator and other mechanical parts into a 3D virtual model or ‘digital twin’ that predicts which components need fixing and when. This in turn enables companies to abandon a maintenance programme based on scheduled maintenance and move to a predictive maintenance basis instead in which broken parts can be repaired or replaced before they do damage.

“The data this software generates has huge potential benefits for the wind turbine industry” said Dr Miltiadis Kourmpetis, at Brunel Innovation Centre. “Our goal is to develop digital models or clones of a wind turbine which combine mathematical models describing the physics of the turbine’s operation, with sensor data from actual parts during day-to-day running. These virtual models will allow wind farm operators to predict failure and plan maintenance, reducing maintenance costs and downtime.”

The digital twin platform will use big data analytics and advanced visualisation and analysis to draw a real-time picture of the turbine’s condition. This will help maintain and optimise real wind turbines, cutting upkeep costs by up to 30 percent, according to the researcher’s calculations. Early breakdown detection could up reliability by as much as 99.5 percent and reduce losses from downtime by an estimated 70 percent. It also lets workers monitor and control entire wind farms digitally and remotely.

By 2025, the potential savings could be vast, running 5,500 offshore turbines could cost a yearly £2 billion – almost the same service bill as UK passenger planes.

Digital twin technology is already changing manufacturing and forecasters predict billions of things will represented by a digital twin with aerospace, oil and gas and transport at the forefront.

The Brunel Innovation Centre team working on WindTwin will target parts for monitoring and use their own machine learning algorithms to crunch the data. They’ll also identify sensors needed to track faults.

Brunel University London is working on the £1.4M 30-month WindTwin projects with experts including Agility3, ESI and TWI. Funded by the government’s Innovate UK, they plan to sell the digital twin platform worldwide and look at how other industries could use it.