Monday, 13 May 2019
0
Dan McCue
Commercial Development Company and Anbaric have signed an agreement to launch the Anbaric Renewable Energy Center at the CDC's Brayton Point Commerce Center in Somerset, Massachusetts. 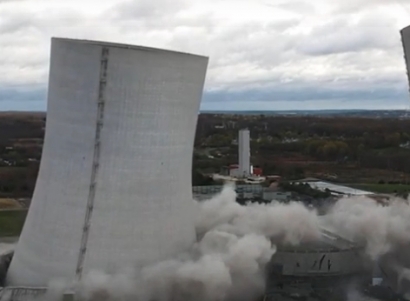 The central element of the Renewable Energy Center is a 1200-MW high-voltage direct current (HVDC) converter – an investment estimated at $250 million – to serve the emerging offshore wind industry. In addition, Anbaric will commence development of 400 MW of battery storage on site, which would bring an additional $400 million in investment.

"Developing a landing point for 1200 MW of offshore wind at the site of a former coal plant physically and symbolically represents the transformation from fossil fuels to wind," Krapels continued.

Late last month, CDC imploded two massive cooling towers at Brayton Point . “The implosion of the cooling towers represents a significant milestone towards the development of Brayton Point Commerce Center - a world-class logistical port and support center built to support renewable energy and the emerging US offshore wind sector,” according to a release on CDC’s website.

"As our country marches towards a clean energy future, our Commonwealth's workers and businesses can be found standing on the frontlines along the South Coast," said Congressman Joe Kennedy III. "By reimagining and rebuilding Brayton Point to meet the needs of our emerging offshore wind industry, the Anbaric Renewable Energy Center will not only strengthen our local economy, it will help us confront the effects of climate change already threatening our coastal communities."