Thursday, 26 April 2018
0
REM
The European Investment Bank has signed a €50 million ($61 million) loan to finance nine wind farms to bedeveloped by the Spanish firm Forestalia Renovables. The shareholders in the “Goya” project are Mirova, a subsidiary of Natixis,  General Electric, Engie and Forestalia itself. This Aragonese firm, which specializes in the development of solar, wind and biomass energy, was the winning bidder in Spain’s first auction for new renewables-based power generation facilities in early 2016. This is the first wind power concession to be awarded without public subsidies or incentives. 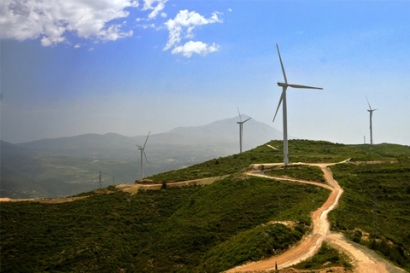 Together with €120 million ($146.4 million) provided by a syndicate of commercial banks, the EIB loan will finance the construction and operation of nine wind plants with a total capacity of 300 MW.

The new wind farms (Argovento, Cañacoloma, El Saso, Sierra Luna, and Las Majas I, II, III, IV and V) will be located in Aragón, specifically the administrative districts of Campo de Belchite, Daroca and Cariñena. In total, 82 wind turbines with an aggregate power generation capacity of over 900 GWh per annum and no pollutant emissions will be installed. The EIB-financed project is also expected to create 700 temporary jobs during the construction phase and 50 permanent jobs when it enters into service.

EU Commissioner for Climate Action and Energy, Miguel Arias Cañete, said, "The European Commission welcomes the financing of these nine wind farms in Aragón. Spain has the potential to be the benchmark for renewable energies and sustainable long-term job creation. These projects provide an example of this potential and they will certainly not be the last."

Support for renewable energy generation is one of the priorities of the EU bank, which promotes the use of clean energy that reduces dependence on other more polluting sources.

The EIB is providing this loan under the Investment Plan for Europe, known as the “Juncker Plan”. This increases the EIB Group’s capacity to finance investment projects that, in line with the Plan’s criteria, involve activities which by their structure or nature have a higher risk profile but which foster firms’ competitiveness and create jobs.  This project will not receive any public sector support and is one of the first to be implemented under the new regulatory framework for the industry approved in Spain in 2013.