Tuesday, 12 April 2011
1
Toby Price
The beleaguered wind industry in Spain is fighting back after it was knocked sideways two years ago by damaging legislative changes that led to an exodus of companies in search of new markets in the US, China and the North Sea. At a time when Spain has taken over top spot from Germany as Europe’s biggest wind energy producer, the Spanish Wind Energy Association has published a catalogue of home-grown companies in the sector, while research centre, Cener, has unveiled a new experimental wind farm facility, all with a view to remaining at the cutting edge of the industry. 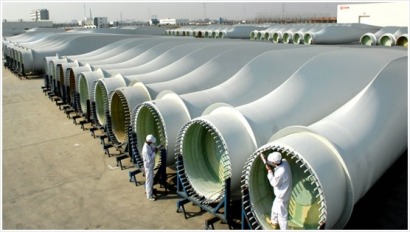 Despite recent setbacks caused by the Spanish government restricting the roll-out of new wind capacity, Spain remains a force to be reckoned with. The Spanish Wind Energy Association (AEE) recently revealed that Spain became the leading wind power producer in Europe in 2010, taking over top spot from Germany.

“This demonstrates the excellent performance of the Spanish system,” says AEE, “having achieved more wind output with less wind turbines".

Nonetheless, the rate at which new capacity is being added slowed last year in both Spain and Germany, with the two countries installing 1,516 MW and 1,551 MW, respectively.

This factor combined with Spain's urgent need to generate jobs to employ the 20% of its workforce who are out of work may be behind two recent moves by the wind industry to encourage wind industry growth.

On the one hand, AEE has published a comprehensive business directory of wind companies in Spain. Co-edited by AEE, the Ministry of Industry, Tourism and Trade and the Institute of Energy Saving and Diversification (IDAE) under the Renewables Made in Spain brand, the business directory is designed as “a useful tool to raise awareness of the strength of the businesses and national technology development centres, but also to further empower these companies individually in the difficult situation the market is facing these days,” explains Alfonso Beltrán García Echaniz, IDAE’s General Director.

“Our developers, having acquired foreign assets of popularity and expanded their presence in more than thirty countries, occupy high positions in the world´s ranking. Our wind turbine manufacturers have increased their production capacity by opening production facilities -inside and outside our country-, and by the acquisition of manufacturing facilities of critical components to ensure their supply chains. Also, they are developing new machinery, looking for innovative solutions and creating strategic alliances,” explains García.

The business directory includes more than two hundred companies, including major wind turbine manufacturers such as Gamesa, Alstom and Acciona, developers, components manufacturers and companies offering a range of services to the sector: from resource measuring to maintenance, civil engineering, transport and logistics and installation. “What they all have in common is that they belong to the Spanish wind sector and that their efficiency is proven,” says José Donoso, President of AEE, who stresses that the industrial base built around wind energy in Spain – which employed (directly and indirectly) 35,719 people by the end of 2009 – and the associated know-how and skills should be of interest to other countries looking to develop their own wind markets.

At the cutting edge

Part of this long history of wind R&D has taken place at the National Renewable Energy Centre (CENER) in Navarre in the north of Spain. Keen to remain a reference for wind development not just in Spain but around the world, CENER has just kicked off a period for applications to install machines at its experimental wind farm.

The centre reveals that several companies are interested in setting up their prototypes at the experimental wind farm in Sierra de Alaiz with a view to carrying out technological development projects. The farm has the capacity to house six multi-megawatt prototypes, up to a total of 30 MW “in privileged conditions for prototype development and engineering”.

The time limit for presenting applications is 28 April 2011, while the wind farm will be registered in the Register of preliminary assignment of tariffs for special regime experimental installations in June 2011.

Tags: Wind ,Spain ,Germany ,wind farm ,Wind energy ,Wind turbine ,Europe ,Renovables ,Renewable energy ,Transport ,Saving ,China ,Jobs ,Gamesa ,Eolica ,Electricity ,Efficiency
Add a comment
Carlos
Spain has to cut down on wind energy because it can no subsidize it. Wind energy is for rich countries willing to pay more for green energy. Spaniards feel very good about green energy and are willing to accept the cost and ignore any criticism, not even to photovoltaic or the huge subsidies given. Perhaps it is better that Spain squandered its resources in green energy instead of wasting it elsewhere. A sad consolation for those who would like a rational approach instead: pay more, but not soooooo much.
electric/hybrid