Grenergy Connects the Duna and Huambos Wind Farms in Peru

Thursday, 07 January 2021
0
REM
Spanish company, Grenergy, successfully completed the connection of the Duna and Huambos wind farms during December 2020, as reported by the Ministry of Energy and Mines of Peru in an official statement. 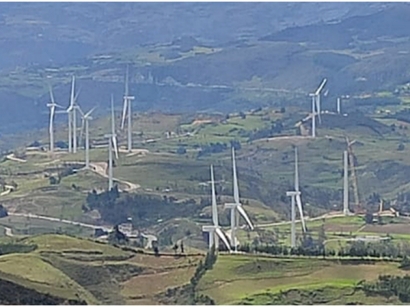 The Duna and Huambos wind farms will have an installed capacity of 36.8 MW and will inject an estimated annual energy production of 165,000 MWh into the National Interconnected Electric System over a period of 20 years.

Both parks are located in Chota, province of Cajamarca, more than 2,400 meters above sea level, and are the first to be installed and operated in the Peruvian Sierra; a geographically strategic location due to its exceptional weather conditions for the generation of this type of energy, as it enjoys around 5,000 net hours of wind per year.

The start-up of Duna and Huambos is part of the Peruvian State's ambitious plan to cover 60% of the country's energy demand using clean energy by 2025, as well as its objective of electrifying areas that are difficult to access, as established with the auctions promoted by the Renewable Energy Law and its Regulations, in which Grenergy was awarded these projects in 2016.

In a context marked by mobility restrictions and limitations imposed by the COVID, the implementation of the Duna and Huambos wind farms has been a huge challenge for Grenergy, although their connection meets the objectives and schedule set out in the business plan and is in addition to other connections carried out during the year in other Latin American countries.

According to David Ruiz de Andrés, CEO of Grenergy, "We would like to thank the institutions of the Peruvian Government: MEM, MTC (PROVÍAS), COES, OSINERGMIN, as well as the contractors Siemens Gamesa and CJR in charge of the construction and operation, and all the companies, advisors and workers who have participated and financing banks: CAF, ICO and SINIA (Banco Sabadell). We hope it will be for our company the first of many green energy investments in Peru in the coming years."