Tuesday, 05 November 2019
0
REM
Ingeteam, an independent global supplier of electrical conversion and turbine control equipment, has reached 1GW of production output within the first year of operations at its production facility in India. The company, which recently expanded this new facility, continues to implement its growth plans in the Indian wind energy sector. 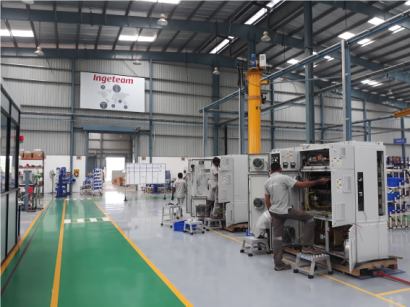 Ingeteam established its new cutting-edge Indian facility in autumn last year in the vicinity of Chennai to satisfy the demand for wind power converters and control cabinets from both local and international OEMs. In response to positive trends in both the domestic and global markets, the 3,500 m² production facility has recently been expanded by 40 percent  to reach 4,900 m². Similarly, Ingeteam has tripled the staff to reach 82 employees, and introduced three additional products to its local production range in the past year.

“Agility is at the core of Ingeteam’s production strategy. Our Chennai wind facility has been built on a modular design, which allows us to rapidly ramp production up or down according to ever-changing market conditions. This flexibility plays a big role in ensuring that our production centre remains both highly efficient and cost-effective,” commented Josep García, Plant Director of Ingeteam Chennai.

In 2018, Ingeteam’s technology was deployed on 15 percent of the newly added wind capacity in India and will reach 1GW of production output by this month.

“I am very proud of my team, and grateful to our key suppliers for their professionalism. Reaching a production output of 1GW within the very first year is no small feat. Year after year, we confirm our leadership role in this promising market,” concluded Josep García.

Ingeteam is the world number one independent converter supplier for wind applications, with more than 45GW installed capacity to date. The company, which has a strong focus on emerging markets, entered the Indian solar PV sector in 2013, with a central office in Delhi. In 2016, Ingeteam experienced significant activity in the wind energy industry. Just two years later, Ingeteam was one of the first global industrial groups to massively invest in the then burgeoning Indian wind energy sector with its new factory in Chennai. This early commitment paid off, as the company has since managed to establish itself as the leading supplier of wind power converters in the country.