Friday, 16 August 2013
0
Robin Whitlock
The company intends to invest up to $1.9 billion in new wind generation with completion expected in 2015 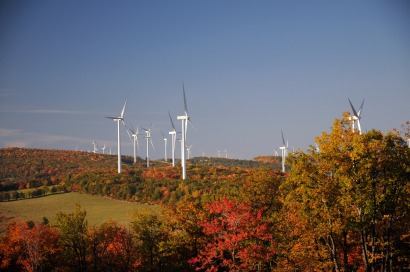 MidAmerican Energy is intending to develop up to 1,050MW of additional wind power generation in Iowa by the end of 2015 and has been granted permission to expand by the Iowa Utilities Board. The company plans to invest up to $1.9 billion in its wind generation fleet in the state and is working with county officials and landowners as well as having already secured development and interconnection rights for the proposed wind farm sites. These will be located in Grundy, Madison, Marshall, O’Brien and Webster counties and construction is scheduled to start in September 2013 with an anticipated completion date prior to the end of 2015.

“MidAmerican Energy continues to be a great partner in enhancing the state of Iowa’s leadership in wind generation and expanding our renewable energy portfolio” said Governor Terry Branstad. “This expansion will bring quality jobs and significant economic benefits to Iowa.”

The wind expansion is expected to enhance economic development in Iowa and provide in excess of $360 million in additional property tax revenues over the next 30 years. Landowner payments of more than $3 million per year are also expected as part of the expansion which is planned to be built at no net cost to the company’s customers. The expansion will also help to stabilize electric rates over the long term by providing a rate reduction totalling $10 million per year by 2017, commencing with a $3.3 million reduction in 2015 which will begin after the company installs the first 350MW of generation capacity. Around 460 jobs will be added to the economy with nearly 50 permanent jobs added upon completion.

“We regularly speak with companies who are looking for green, renewable energy, and MidAmerican Energy’s efforts are helping us market Iowa in recruiting new jobs” said Lt. Gov. Kim Reynolds. “Not only is this the largest economic development investment in Iowa’s history, it is a great story for us to share with potential businesses.”

Bill Fehrman, President and CEO of MidAmerican Energy, added that the best way to meet customers energy needs is to provide reliable, affordable and environmentally responsible energy through a diversified generation portfolio. The wind expansion will help to stabilize electricity rates over the long term as well as demonstrating the company’s commitment to reducing the environmental impact of power generation.

MidAmerican began building wind energy projects in 2004 and so far has installed 1,267 wind turbines in Iowa thereby making the company the largest rate-regulated utility owner of wind generation in the US. The company’s wind generation package will consist of around 39 percent of its total capacity by July 2016 alongside coal, natural gas, nuclear and various other energy sources.