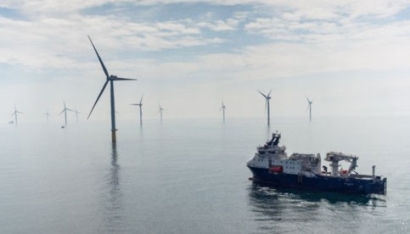 Combined, both projects will total 1,700 MW, enough to power more than one million New York homes and support an estimated 1,600 jobs with a combined economy activity of $3.2 billion statewide.

Subject to contract signing and Ørsted’s and Eversource’s final investment decision, the wind farm is expected to be operational in 2024.

Martin Neubert, Executive Vice President and CEO of Ørsted Offshore, spoke of the project, saying, “New York State has set an ambitious goal to be 100 percent powered by clean energy by 2040. We fully share that vision, and we’re proud to bring more than two decades of offshore wind expertise to the state and to be fronting the offshore wind build-out in New York with a combined 1,000MW capacity via our South Fork and Sunrise Wind projects.”

Ørsted and Eversource have signed a wind turbine contract with Siemens Gamesa for the joint venture’s entire Northeast project portfolio. Subject to Ørsted’s and Eversource’s final investment decision, all three offshore wind farms in the portfolio will be installing Siemens Gamesa’s 8.0 MW turbines.

Equinor’s 816-MW Empire Wind offshore wind project is expected to be developed with 60-80 wind turbines, with an installed capacity of more than 10 MW each. Total investments will be approximately $3 billion, and the project will be able to power over 500,000 homes in New York, with an expected start up in late 2024.

“Being selected in this highly competitive field of bidders shows the confidence that New York leadership has in Equinor’s capabilities of developing large offshore energy projects, delivering affordable renewable energy while also providing significant economic benefits locally. We are now looking forward to working with our partners throughout New York State to bring this project forward,” Christer af Geijerstam, President of Equinor Wind US, said.

Empire Wind is expected to create approximately 800 local jobs during construction and operation, including through the creation of locally manufactured turbine foundations in New York’s Capital Region. More broadly, Equinor is committed to developing the nation’s first offshore wind supply chain to support the construction, installation and operation of offshore wind projects.

Equinor will also invest over $60 million in port upgrades in New York that will support future offshore wind projects.

The results of this historic procurement mark an important new chapter in New York's offshore wind planning efforts, which have been conducted for more than three years and have included comprehensive and extensive stakeholder, agency and public consultation, along with detailed technical and financial analysis. These projects have received significant support from state and local elected officials and stakeholder groups, including conservation organizations, labor advocates, academic institutions, the maritime industry and more. In particular, New York's approach requires developers to adapt their project plans through discussions with commercial fishermen and environmental organizations and in accordance with evolving best practices.

"The environment and climate change are the most critically important policy priorities we face," Governor Cuomo said. "They literally will determine the future - or the lack thereof. Even in today's chaos of political pandering and hyperbole there are still facts, data and evidence - and climate change is an undeniable scientific fact. But cries for a new green movement are hollow political rhetoric if not combined with aggressive goals and a realistic plan on how to achieve them. With this agreement, New York will lead the way in developing the largest source of offshore wind power in the nation, and today I will sign the most aggressive climate law in the United States of America. Today we are true to the New York legacy - to lead the way forward, to govern with vision and intelligence, to set a new standard, and to match our words with action."