Thursday, 05 May 2016
0
Dan McCue
The Obama administration is revising a federal rule that it says will help maintain populations of threatened eagles in the U.S. while also permitting the development of wind farms. 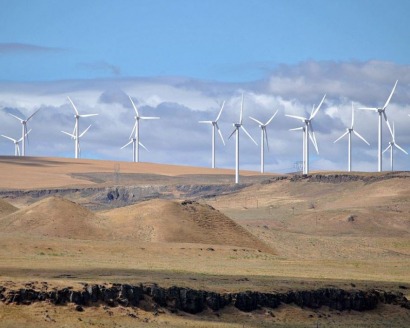 The plan, however, is already inspiring criticism from environmentalists who say the changes will allow wind-energy companies to kill thousands of bald and golden eagles each year for up to 30 years.

Golden and bald eagles are not endangered species but are protected under the Bald and Golden Eagle Protection Act and the Migratory Bird Treaty Act.

The laws prohibit killing, selling or otherwise harming eagles, their nests or eggs without a permit.

Under the plan announced Wednesday, wind-energy developers and utilities will be allowed to kill or injure up to 4,200 bald eagles a year without penalty.

The takings of golden eagles, a species currently considered more imperiled in the U.S. that the bald eagle, will be allowed without penalty, but only after companies take steps to minimize the losses.

The permits would be reviewed every five years, and companies would have to submit reports of how many eagles they kill.

US Fish and Wildlife Service Director Dan Ashe said the 162-page proposal would protect eagles and at the same time "help the country reduce its reliance on fossil fuels" such as coal and oil that contribute to global warming.

"There's a lot of good news in here," Ashe told the Associated Press.

The plan was developed after a federal judge in California blocked a 2013 rule that gave wind energy companies nearly unfettered permission to kill bald and golden eagles.

The agency had classified its action as an administrative change from a 2009 rule, excluding it from a full environmental review.

The Fish and Wildlife Service estimates there are about 143,000 bald eagles in the United States, and 40,000 golden eagles.

In a statement of his organization's website, Dr. Michael Hutchins of the American Bird Conservancy, said  “We will be carefully reviewing the new eagle rule proposed today by the U.S. Fish and Wildlife Service to ensure it is based on sound science."

“We're concerned that this new plan will still allow the killing of thousands of eagles," Hutchins continued. "This new rule must require effective, tested mitigation to reduce any eagle deaths to an absolute minimum. We also need better monitoring of eagle mortality—with data collected by independent third parties and made publicly available—so that adjustments can be made to prevent negative impacts on eagle populations. And we'll be looking for standards that mandate proper siting of wind energy facilities, away from sensitive areas for birds, so that impacts to eagles can be minimized. Any rule that aims to ‘protect and maintain eagle populations' will require these steps."

Wednesday's announcement kicks off a 60-day comment period. Officials said on Wednesday that they hope to issue a final rule this fall.

US Fish and Wildlife Service