Monday, 24 October 2022
0
Robin Whitlock
Perceptual Robotics has given the wind inspections and maintenance industry a preview of its unique capabilities by holding exclusive demonstrations with potential partners. 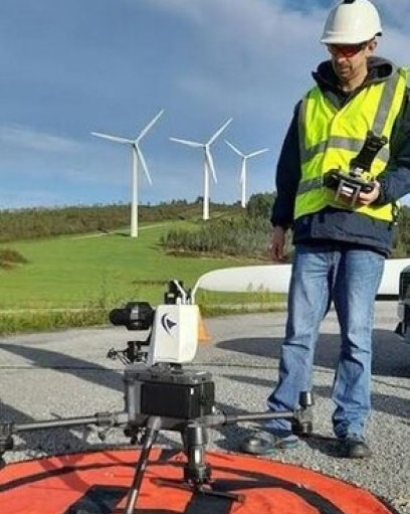 The company, which has offices in the UK and Europe, welcomed eight companies across Spain to take part in its demonstration day at Sotavento Experimental Wind Farm in Lugo, Spain. Perceptual Robotics engineers flew an M300 drone and used its unique Dhalion system to autonomously inspect a G47 wind turbine at the site on the 18th of October.

Two demos were held altogether, with attendees given a first-hand preview of the Dhalion system and an inspection as it happened in real time. Perceptual Robotics engineers then showed post flight what data processing looked like and how inspection images and results were presented and analysed in the system’s web portal.

“This was an excellent opportunity for different stakeholders in the industry to see up close how our system works in real operating conditions” said Kostas Karachalios, CEO of Perceptual Robotics. “We had people from all aspects of the industry attending, from asset and utility owners to drone companies and inspection organisations. By sharing our extensive experience of inspecting these massive structures, we can bring about the change the industry needs to make inspections more cost effective, timely and safer for all.”

Earlier this year, the company announced that the advanced technology of robotic systems and artificial intelligence had proven to be almost 15 percent more accurate in detecting faults in wind turbines thanks to an Innovate UK Research and Development project, which had been ongoing in collaboration between Perceptual Robotics and the University of Bristol. The project showed the partners’ unique system had a 14% improvement in fault detection accuracy when compared with expert humans carrying out the same inspections.

Perceptual Robotics’ demonstration days are set to be the first of many moving forwards, with the company asking those interested in seeing the system first-hand to get in touch to arrange a meeting.