Monday, 18 May 2015
0
Robin Whitlock
The announcement by E.ON and the Green Investment Bank that they will invest in the £1.3 billion Rampion Offshore Wind Farm has been officially welcomed by The Crown Estate, the organisation that manages the UK seabed for the Crown. 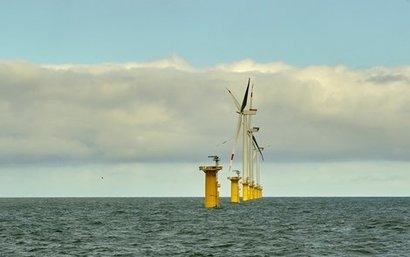 The Rampion Offshore Wind Farm will be constructed 13 kilometres off the coast of Sussex. The announcement by E.ON and its partner, the UK Green Investment Bank plc (GIB), means that the green light has been given for the full construction of the 400 MW project which will consist of 116 offshore wind turbines.

When complete, the wind farm will provide enough electricity for around 300,000 homes and reduce CO2 emissions by up to 600,000 tonnes per year.

“Today’s announcement of the £1.3 billion investment from E.ON and the Green Investment Bank in the Rampion offshore wind farm represents a major milestone as it becomes the first project to enter construction under our Round 3 leasing programme” said Huub den Rooijen, Head of Offshore Wind at The Crown Estate. “We look forward to continuing to work with the industry to bring forward these large scale wind projects which will help further bring down costs and support the UK’s low carbon energy mix over the long term.”

The new Secretary of State for Energy and Climate Change, Amber Rudd MP, added that the investment is a vote of confidence in the UK which will create local jobs, bring business opportunities and provide clean, home-grown energy. Ms Rudd said that the UK is the best place in the world to invest in offshore wind, thanks to the certainty provided to investors by the government through the Green Investment Bank.

Rampion Offshore Wind Farm is a strategically important project for the UK and is one of the biggest capital projects confirmed in Britain so far this year. The onshore substation serving the wind farm will be constructed at Twineham with work planned to commence in June, closely followed by preparation work for the onshore cable route. Offshore construction on the wind farm itself will begin in early 2016 with completion scheduled for 2018.

E.ON will be holding community information events over the forthcoming weeks and months in order to update local people of the work involved. It is expected that a workforce of up to 100 will be needed for the onshore cable route and a further 40 to 60 people employed at the onshore substation during its construction. 250 to 300 jobs will be generated during the 3 year offshore construction period. Local vessels will be utilised with 40 jobs based at the project management facility in Newhaven Port and once the wind farm is commissioned and fully operational it is envisaged that up to 65 full time permanent jobs will be created at the operations and maintenance base.

The Rampion project remains set to become the first offshore wind farm off the south coast of England and is believed to be the first UK Round 3 project to enter construction. The UK Green Investment Bank plc (GIB) has acquired a £236 million stake in the project making it the GIB’s seventh investment in the UK offshore wind sector. Last month, GIB’s subsidiary UK Green Investment Bank Financial Services Limited also announced that it had reached first close on the world’s first offshore wind fund, designed to attract new investors to the UK.