Monday, 09 July 2012
0
Dan McCue
The decommissioning of offshore assets is a reality in the oil and gas industry, where platforms that were once the vanguard of technology have now grown old and the search for petroleum is venturing into ever-deeper waters. 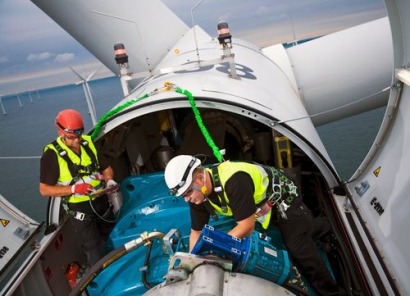 Now, a British petroleum industry group is encouraging its brethren in the renewables field to learn from its lessons and to think about the end of life of assets before they are ever erected.

The group, Decom North Sea (DNS), has even gone so far as to exhibit at the most recent All Energy -- the UK's largest renewables show -- which was held 22-23 May. While there, the group's booth was located in the Offsore Maintenance section, where exhibitors focused on the operation, repairs and upgrades that typically need to be made over the 26 year lifespan of a typical wind farm life.

"Offshore wind developers have an obligation to submit decommissioning plans and demonstrate how they will fund and manage them at the end of project lifespans," said DNS Chief Executive Brian Nixon. "It is important that companies involved in renewables projects consider what will happen with installations at the end of their life span. This has been a costly lesson for many companies in the oil and gas industry that did not plan ahead for the decommissioning stage.

"In the early stages of new offshore projects, the emphasis is naturally focused on design, construction, operations and maintenance, but we would encourage developers to give serious consideration to the costs and strategy for decommissioning at the initial design stage, particularly with the large number of installations involved with an offshore wind development.”

Many companies active in the decommissioning of oil platforms in the North Sea and Gulf of Mexico (where US "Idle Iron" regulations mandate the removal of non- and extremely low-producing platforms), say their work is complicated and often made far more dangerous by the lack of forethought then went into erecting the platforms three decades ago.

Back then, little thought was given to how the structures would eventually be taken apart; Since then many platforms have changed hands many times, often meaning critical paperwork and original plans have been lost.

Nixon said participating in All Energy was a perfect opportunity to relay the oil and gas industry's experiences to those working in the renewables sector, especially with the ever-increasing development of offshore wind farms around the UK and Northern Europe.

Decom North Sea was founded in 2010, and now has nearly 200 members drawn from operators, major contractors, service specialists and technology developers. With annual decommissioning expenditure in the North Sea forecast to top £1billion within a few years, the organisation is working to tackle the main areas of weakness, which are inhibiting decommissioning supply-chain capability.