Wednesday, 28 November 2018
1
REM
Robert Gordon University is collaborating closely with Scottish company Span Access Solutions and its partners on an innovative project that could save £1.05 billion across the current European fleet of offshore wind farms. 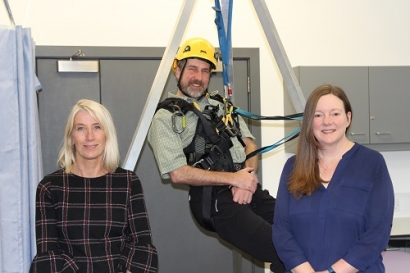 Not only will this system reduce maintenance costs and minimize turbine downtime, it will increase the quality and speed of repairs and performance upgrades.

RGU will put its expertise to work, alongside Span Access - a specialist in alternative access and working at height solutions - along with partners Turner Access Ltd., Turner Iceni, the Offshore Renewable Energy (ORE) Catapult and the University of Dundee.

The BASE project will create an optimized prototype access solution for any challenging blade design, which will be demonstrated at ORE Catapult's 7MW Levenmouth Demonstration Turbine in Fife.

RGU's involvement in the project will involve practical research carried out by Dr. Arthur Stewart - whose previous award-winning ergonomics work has involved egress and passing ability in confined spaces on offshore installations - alongside Head of the School of Health Sciences, Dawn Mitchell, and Professor Kay Cooper.

Arthur Stewart, senior ergonomics researcher and project leader at RGU, said, "Tasks such as repairing and upgrading turbine blades are typically performed by rope access technicians suspended from the top of the turbine. This can lead to lengthy delays and difficulties due to variable weather and working conditions.

"Our role at RGU will include a series of experiments to compare the effectiveness of completing manual tasks while standing, compared with when suspended on a harness - both at RGU and Span Access's purpose-built ropes training facility in Kinross.”

Ross Turner, Managing Director of Span Access, added, "The BASE solution will be faster to deploy and more flexible to use than traditional suspended platforms and so the revenue lost from forced turbine shutdowns associated with blade maintenance will be substantially reduced.”