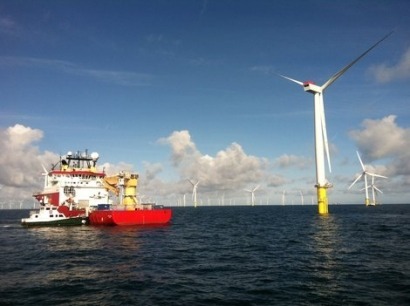 The contract was awarded to the company by Reef Subsea to support their two cable installation vessels at the RWE Innogy site. Gwynt y Môr is one of the largest offshore wind farms currently under construction in Europe. Once complete it will consist of 160 turbines with the combined capacity of 576MW – enough energy to power around 400,000 homes.

Gwynt y Môr is located off the North Wales coast and is expected to be completed by the end of this year.  According to James Doyle, managing director of Rix Sea Shuttle, the contract should place the company at the centre of the crew transfer vessel market.

“We are delighted to win a contract on what is a hugely important project for the renewable energy industry” Mr Doyle said. “It will be a real source of pride to be able to say we had a small hand in building it. The two vessels we have supplied will be used to take engineers and technicians to and from individual wind turbines to support both first end and second end pull-in operations. One will operate 24/7 while the other will provides daytime support, then they will reverse roles to ensure the crews are properly rested.”

Rix Sea Shuttle will provide two crew support boats called the Panther and the Tiger in order to aid cable installation vessels Polar Prince and Polar King. The contract includes a provision to supply spares for each vessel enabling the company to respond to any breakdowns very quickly. The company also has spare engines and propellers in stock thereby ensuring the vessels can operate on schedule within the project time line.

Rix Sea Shuttle is part of Hull family firm J.R. Rix and Sons which has been operating cargo ships, marine tankers and barges for more than 100 years.

Although Rix Sea Shuttle is a new company it is part of a group which was founded more than a century ago on the marine industry and as such, contains a lot of the experience and knowledge Reef Subsea was looking for according to Anthony Michelin the company’s project director.