Thursday, 11 February 2021
0
Robin Whitlock
Siemens Gamesa Renewable Energy (SGRE) and CrossWind have executed the contract to deliver the turbines for the 759 MW Hollandse Kust Noord offshore wind farm, including the supply of 69 SG 11.0-200 DD offshore wind turbines and a 15-year service and a maintenance agreement. 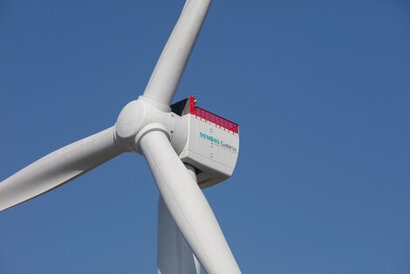 Final conditions are planned to be met in the coming months, converting the contract into a firm order for Siemens Gamesa. The Notice to Proceed has been signed, following the issuance of the irrevocable permit from the Dutch authorities to CrossWind in December 2020.

The Hollandse Kust Noord project is the third project of the Dutch national offshore wind roadmap based on subsidy-free tenders. As the first project for Siemens Gamesa with joint venture partner Shell, and the second offshore project with joint venture partner Eneco, the companies are keen to join forces and create a broader renewable-energy future. CrossWind’s parent companies Shell and Eneco have already taken the Final Investment Decision.

CrossWind is a joint venture between Shell (79.9 percent) and Eneco (20.1 percent), specially created for this offshore wind project. Construction work on Hollandse Kust Noord is expected to commence in 2023 with turbine commissioning planned to be completed the same year. When operational, the offshore wind power plant will be able to generate renewable energy equal to the energy needs of 1 million Dutch households.

“As our first project with Shell and our second offshore project with Eneco, we’re extremely excited to grow our partnership with both companies through Hollandse Kust Noord” said Marc Becker, CEO of the Siemens Gamesa Offshore Business Unit, who continues, “Siemens Gamesa is at forefront of delivering solutions that contribute to decarbonizing the power sector, and simultaneously aid in securing a green recovery from the COVID-19 pandemic. We’re happy to lend our expertise in offshore wind and help The Netherlands achieve zero greenhouse gas emissions from their energy supply by 2050. On an even more local level, the long-term Service agreement ensures direct economic benefits for years to come.”

Tjalling de Bruin, CEO, CrossWind, added that with contracts in place, final investment decision taken, and turbines instated with the latest technologies, the company will be able to deliver clean energy by 2023.

The Netherlands is planning to build six offshore wind zones between 2015 and 2030 on the path to achieve carbon neutrality and combat climate change. Of these zones, Siemens Gamesa offshore wind turbines will be installed at all three awarded zones when construction is completed: exclusively at Hollandse Kust Zuid and Hollandse Kust Noord and co-installed at Borssele.

Offshore wind has been determined to play a decisive role in the Dutch movement towards carbon neutrality and combatting climate change. Under the Ministry of Economic Affairs and Climate Policy, the Dutch national government is aiming for a minimum of 55 percent reduction of greenhouse gas emissions in 2030 compared to 1990. The Netherlands also wants to achieve zero greenhouse gas emissions from the energy supply by 2050. Both an acceleration of deployment of offshore wind and a focus shift from “cost reduction” to “minimal CO2 design” change is needed to reach both 2030 and 2050 targets.

Over 1,000 Siemens Gamesa Direct Drive offshore wind turbines have been installed in all major offshore wind markets globally. They include the UK, Germany, Denmark, The Netherlands, Belgium, Taiwan, and the USA, among others. Furthermore, confirmed orders for more than 1,000 additional Offshore Direct Drive turbines have been received, with both firm and conditional orders planned for the markets mentioned above and new offshore markets including France and Japan.