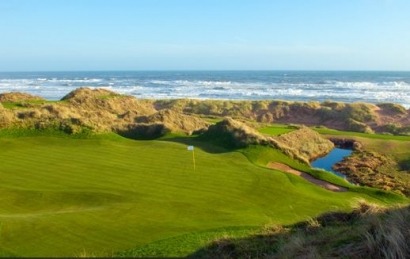 The ads reportedly liken the government’s support of wind farms with the 2009 decision to release Abdelbaset al-Megrahi, the man convicted of the Lockerbie bombing, according to the Scotsman.com website.

Word of the action by the authority, which regulates ads in newspapers and other media, was proply cheered by renewable energy supporters, including the Scottish chapter of the World Wildlife Federation.

Commenting on news that the ad is to be banned, WWF Scotland director Lang Banks said, "When it comes to wind power, Donald Trump's grasp of the facts has once again been shown to be totally lacking. The advert was pretty distasteful, and it's now been shown to be factually wrong too.”

Banks added, “If the evidence to be presented at his forthcoming court challenge is as flimsy as that used to create this misleading advert then it's likely to be a very short case."

The decision to stop the spot is the latest chapter in Trump's long-running battle with Scottish ministers who have approved construction of an experimental offshore wind farm in the North Sea near Aberdeen.

Trump is building a multimillion-dollar golf resort on the coast near the wind farm site and he claims the facility will ruin the views from his resort and greatly diminish the value of his investment.

Earlier this year, the developer and reality television star vowed to use "every legal means" necessary to stop the wind farm.

In this case, presumably Trump intended to illustrate what he sees as the Scottish government's alleged history of poor decision-making.

In 1988, Pan Am Flight 103, a flight from London's Heathrow Airport to New York's John F. Kennedy International Airport, was destroyed by an explosive device, killing all 243 passengers and 16 crew members.

The bombing took its name from the fact many large sections of the plane rained down on Lockerbie in southern Scotland, killing an additional 11 victims on the ground.

In 2009, the government released Abdelbaset Ali Mohmed al-Megrahi, a Libyan airline, convicted of 270 counts of murder and was sentenced to life imprisonment in connection with the bombing on humanitarian grounds.

Ministers had been told by doctors that Megrahi had terminal prostate cancer and was expected to have around three months to live. He did not die until May 2012.

Upon learning of the authority's decision, which will be published this week, George Sorial, executive vice president of the Trump Organization, told The Sunday Herald newspaper thathe was surprised by the decision, since that ad had been approved in advance by Scotland’s Committee of Advertisement Practice.

“The fact that the ASA has now clearly contradicted the advice of CAP demonstrates how disorganized, inefficient, and wasteful these agencies are,” he told the newspaper.

The decision is the second such ruling the ASA has made against Trump over his anti-wind farm campaign. An earlier advertisement was banned for exaggerating the number and type of turbines used in Scotland.

" Following due process, the Scottish Government made the right decision in approving the development. It's a great pity that Scotland's sensible aim to cut emissions and create jobs through the use of wind power is being put at risk by Trump's actions," he said.