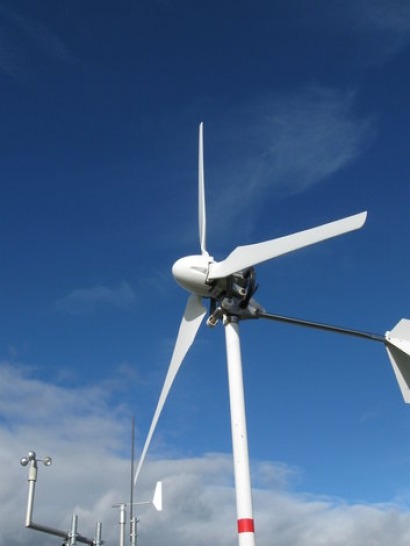 The blades were conceived, designed and manufactured by the Stuttgart University’s Endowed Chair of Wind Energy (SWE) after having discovered that Biotex Flax delivered the performance characteristics they were looking for. The team began designing the new blades in 2011 focusing on improving the reliability of turbines while reducing production costs. The aim was to design a new set of blades for the university’s 1kW rooftop wind turbine.

Following a visit to the UK’s Eden Project, the team also wanted to concentrate on manufacturing blades with natural fibres and contacted Composites Evolution with the aim of testing the company’s Biotex materials. These were subsequently tested with different resins, alongside a range of other natural fibres, to validate their performance characteristics. Biotex Flax, which incorporates a unique twistless technology, was found to be the superior material.

The new blade consists of Biotex Flax 2x2 twill 400gsm as the main shell and Biotex Flax unidirectional 275gsm used for the blade’s belt and root. It was built in two halves, both of which were hand-laminated before being vacuum-bagged in two female moulds. The two separate halves were then joined using Momentive’s RIM 235 epoxy resin.

Upon completion the blades were assembled on to the rooftop turbine for performance testing. SWE plans to conduct other tests in order to validate the blades strength performance compared to blades constructed from other materials. A fourth blade was embedded with strain gauges and the team will be comparing the results to standard carbon and glass blades.

The blade will be presented at JEC Europe in Paris, 11th-13th March.